Apple Shares New Ad For Fitness+, Proving 'All You Need Is An iPhone,' And Services 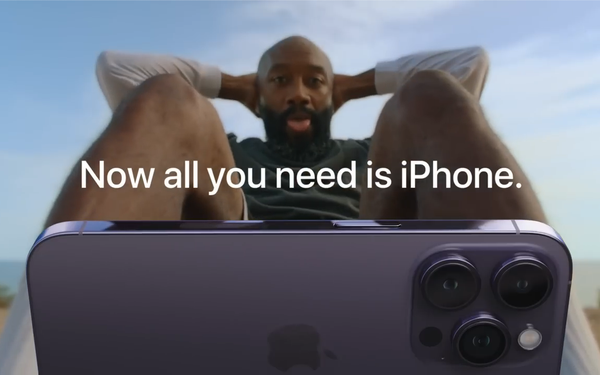 Apple’s focus on the latest release of its Watch and related apps announced in September points to fitness, health, and wellbeing, proving that services and subscriptions can offset any revenue declines or slowdowns for hardware.

The company on Friday released a 30-second spot on YouTube based on Apple Fitness+, which launched last week. It shows that people can exercise anywhere using the Apple Fitness+ app as long as they have an iPhone.

“All you need is iPhone to subscribe and access thousands of video and audio workouts — everything from HIIT to Yoga, and guided meditations,” according to Apple. “Take it further with personalized metrics from Apple Watch. Find it in the Fitness app on iPhone, iPad, or Apple TV.”

Images take the viewer from a home gym to courtyard, public park, and work area.

The ad highlights the iOS 16.1 feature that allows iPhone users to access and use the subscription service without an Apple Watch.

Apple Watch has been the device in which users can track workouts, with fitness information collected by the Apple Watch. The latest version of the operating system allows Apple to let ‌iPhone‌ owners without an Apple Watch participate in the workouts on their ‌iPhone‌.

Earlier this month, Apple also launched a spot for the Apple Watch Ultra called Call To The Wild. The Apple Watch Ultra has a titanium case with crips display, customizable Action button, water resistant 100m and three specialized bands made for athletes and adventurers.

Apple on Thursday reported revenue and profit that topped Wall Street targets, despite its grim holiday forecast predicting a slowdown. The company said revenue growth would fall below 8% in the December quarter but did not go into details.

iPhone sales set a record for the September quarter, up 10% compared with the prior year's quarter and exceeded the company's forecast.

Apple reported having about 900 million paying subscribers to its services, up from 860 million in the previous quarter. The company said that paid accounts are growing faster than transacting accounts, so the penetration of paid accounts is increasing.

Services in the quarter recorded revenue of $19.2 billion.

"We have a great subscription business, 900 million paid subs now on the platform and growing very fast,” Apple CEO Tim Cook said during the company's Q3 2022 earnings call. “We doubled in 3 years. This is the part that is really interesting to us because we really believe that the engine for services growth is there, foreign exchange is a temporary thing and the fundamentals are very good,"