The accreditation comes two years after Meta committed to an MRC audit of its brand-safety solutions.

It applies only to Meta’s direct monetization controls and is based on the MRC’s “brand safety guidelines,” which incorporate the Global Alliance for Responsible Media’s “floor” and “suitability” criteria for direct ad placements on its content.

"Direct monetization" is jargon for when ads are placed directly on content -- within an Instant Article or in-stream video (pre-roll, mid-roll, etc.) -- as opposed to ads being placed adjacent to content in Meta platform feeds or other placements.

The accreditation covers Facebook’s “Instant Articles” and in-stream video on desktop, mobile web and app inventory and is enabled through an “inventory filter” and “placement opt-out” tools developed by Meta for creating ad campaigns.

The accreditation is limited to:

The accreditation does not include Facebook’s feed or any Instagram placements, and the MRC deems it “an initial step for Facebook’s “production direct monetization controls,” but notes that broader Facebook feed and Instagram brand safety and suitability controls – including content adjacency – are still in development by Meta and that the company has committed to have those broader controls audited beginning in the third quarter of 2023.

Meta recently announced that it has begun testing its content-based inventory filters for both Facebook’s and Instagram’s feeds.

“We will continue to iterate on the brand safety and suitability solutions we make available to businesses and plan to extend the MRC audit to the content-based inventory filter controls for Feed once they are generally available,” Meta Vice President-Client Council and Industry Trade Relations Samantha Stetson writes in a blog posted about the accreditation this morning.

While MRC accreditation of media measurement and ratings services does not connote "currency" status, they are deemed important ad industry stamps of approval. 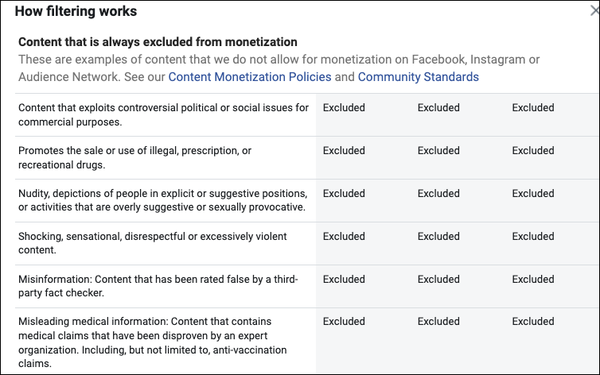