Premium SVOD Subscription Churn Up By 14% In Q3 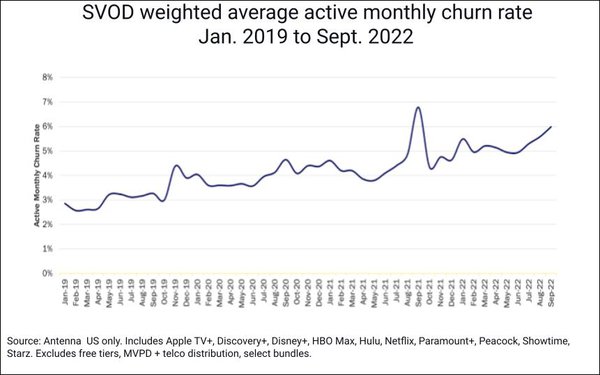 Combined subscription cancellations across 10 leading subscription-based video-on-demand (SVOD) services rose by 14% in Q3 2022 in comparison to both Q2 and Q1, according to Antenna.

More than 32 million subscriptions were cancelled across the tracked services in Q3, compared to 28 million in each of the two previous quarters.

In Q2, Antenna reported a significant slowdown in SVOD growth. The quarter-over-quarter subscriber growth rate was 1.5% -- the lowest since the company started tracking the market in 2019. 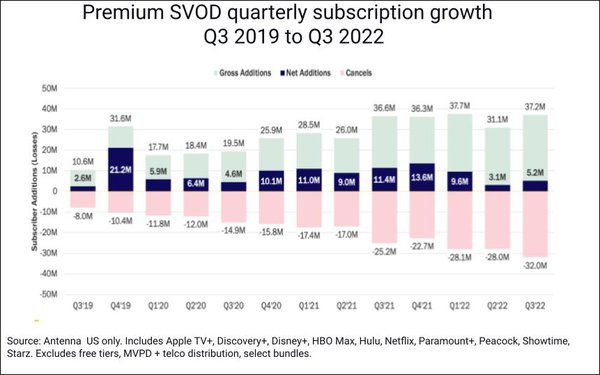 Churn’s acceleration is clear at the SVOD brand level.

Antenna previously reported a meaningful uptick in Netflix churn following the service’s price increase in January 2022. The service’s churn rate was up again in Q3 — to 3.5%, from 3.4% in Q2 and 2% in 2021. 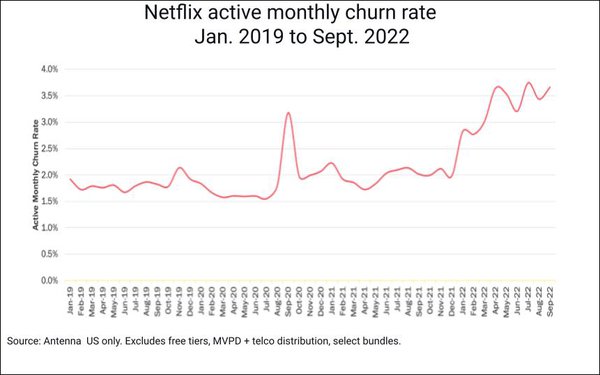 Although Netflix is not the only premium SVOD service facing increases in churn, the trend is “far from a universal rule in the category,” notes Antenna, which defines three distinct groups among the leaders. 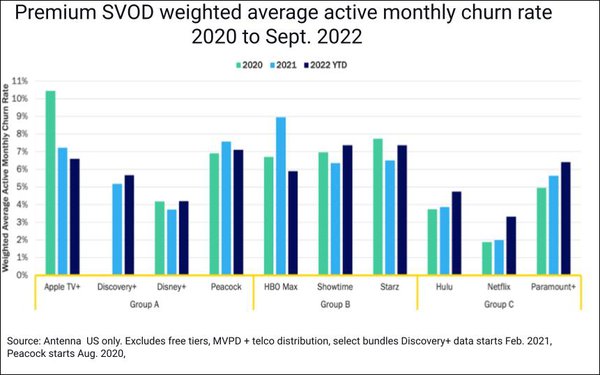 Group A consists of services that launched in the past three years, since the so-called “streaming wars” began.

Apple TV+ briefly experienced post-launch high churn, but has since, along with Discovery+, Disney+ and Peacock, had fairly stable churn levels. These services were born into a highly competitive market and have battled difficult churn dynamics from day one.

The decades-long competition among the three legacy linear brands in the Group B — HBO, Showtime and Starz — has carried over to their streaming products, and their churn has also remained stable over the past three years.

In streaming’s early days, “each of these services had a strikingly clear and unique value proposition: Hulu was ‘Yesterday’s TV shows,’ Paramount+ (then CBS All Access) was ‘Live sports and news without a pay TV subscription,’ and Netflix was ‘Always something to watch,’ with its enormous catalog and groundbreaking personalization engine,” notes Antenna.

While these services certainly had to manage churn, they were so differentiated within their relatively less competitive market that they had significantly lower churn rates than they do today.

“All in all, competition in SVOD will only intensify in the future, so having a robust understanding of what impacts churn and the strategies available to minimize it will continue to be critical for all market players,” notes Antenna.

Antenna’s underlying data consists of raw transactions from a panel of millions of U.S. consumers who have opted in to contribute their purchase information, anonymously, for market research purposes.

Antenna cleans and models the data, then weights the panel for demographic and behavioral skews.