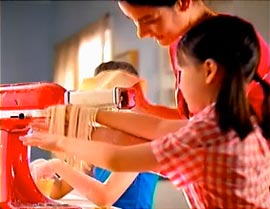 Showing products doing its job well is a strategy that’s paying off for KitchenAid.

A recent set of ads from the brand touting how the company is focused on “the most important room of the house” is topping Ace Metrix’s ad-ranking list in the appliance category, indexing far above the category norm.

KitchenAid’s ads show off the product’s everyday usage, using a jaunty musical soundtrack and a pleasant voiceover to declare that the company’s makes more than “stuff.” “We’re making culinary history,” the female voiceover says in a spot for the company’s 13-cup food processor, which topped the list with an index score of 699. “It’s a lot less process and way more pro.” Other spots that scored well include a 60-second commercial for the company’s signature stand mixer (showing all of the many things it can do in addition to mixing cookie batter), and a shortened version of the food-processor commercial.

“Sometimes the obvious [approach] is the best,” Peter Daboll, CEO of Ace Metrix, tells Marketing Daily. “It’s hard to do simple well, and that’s what they’ve been able to pull off.”

Continuing the theme of focusing on what the company is all about, all the spots contain the line: “We only make products for one room: the kitchen. Because like you, that’s where we shine.” The spots also include the memorable ending line: “Nobody knows the kitchen like KitchenAid.”

The ads are particularly appealing to women over 50, who are presumably the main buyers of the appliances, Daboll notes. Among the ads’ strengths appealing to this demographic is the way it puts the information at the forefront, with glorious and attractive food shots in a straightforward manner. “It’s not demeaning,” he says. “It treats [the audience] with respect.”

At the other end of the spectrum, Electrolux’s use of Kelly Ripa as a corporate spokeswoman seems to be missing the mark. Two of the company’s spots featuring the talk show host and actress score well below the category average of 611, according to the Ace Metrix research. The ad struggles partly because it strains credibility among the audience to believe a busy and wealthy celebrity like Ripa actually does a significant amount of her own cooking and laundry, Daboll notes.

“In this fragmented world, celebrities are hugely polarizing,” Daboll says. “We’ve studied every single celebrity ad, and, in general, they perform below the norm.”