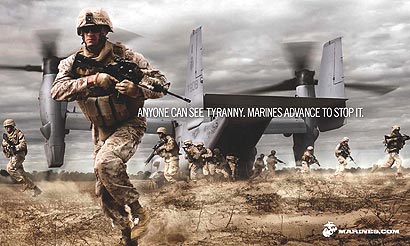 The Marine Corps is launching a new multimedia campaign called "Toward the Sounds of Chaos." The campaign, which highlights the breadth of the Marine Corps mission both in military operations and in humanitarian assistance and disaster relief in places like Haiti and Japan, aims to boost diversity among potential recruits and reacquaint the public with the Marine Corps. The message: Marines are elite warriors, but also smart, courageous and compassionate citizens.

The effort, via JWT, the Marines' AOR for the past 65 years, includes a newly designed Web site, www.marines.com, national television, print and online advertising, in addition to in-school, cinema, mobile and social media advertising. The national TV launch is on March 10 during the Big 12 Championship Game on ESPN. The ads have also been online at the Marine Corps’ Facebook tab.

The Marines say that the campaign, currently slated to run throughout fiscal 2012 and into fiscal year 2013, reflects its own recent market research suggesting that young Americans respond to the idea and appeal of the warrior. The second trend the service recognizes is the multicultural nature of the young American population.

The research suggests that youth have traditionally viewed military service as a route to personal focus and improvement, but that a third of young Americans naturally inclined toward military service are equally likely to value military involvement in humanitarian missions as they are to support a military response to a terrorist attack. The Marines concede that youth view military with high admiration, but not the level of aspiration or prestige they associate with college.

The print ads offer dramatic panoramic photos of Marines leaping into action on the ground, with one shot showing gunships and Osprey (tilt rotor tactical aircraft) swooping overhead. Supers say things like: "Anyone can hear chaos. Marines move to silence it" and "Anyone can see tyranny. Marines advance to stop it.”

Maj. John Caldwell, assistant chief of staff/national director of public affairs of the Marine Corps Recruiting Command, tells Marketing Daily that the 35th Commandant of the Marine Corps made it explicit in his planning guidance that the corps' rank and file needs to be more diverse. “To that end, Marine Corps Recruiting Command (MCRC) has an integral role at the accession point.” He says the Marine Corps accessed its most diverse group of young officers in a decade during Fiscal Year 2011 and that this year the MCRC will expand its event programs to boost awareness both to potential officers and enlisted candidates and the general public.

"These engagement events build lasting relationships among diverse communities, dispel common misconceptions about the Marine Corps, and increase overall diversity accessions," he says. "Our survival, status, and reputation depend on our special relationship with the American people. Diversity broadens the base of support. Additionally, Marines deserve to be led by a diverse and representative officer corps."

Caldwell adds that the last big recruiting campaign for the service was in September 2009, with “America’s Few,” which he says will be replaced by the new campaign. "This campaign -- like those that precede it -- represents an evolution to the brand message designed to address the challenges of the era and the unique traits inherent in this generation of potential recruits," he says. "Today’s millennial youth have a different definition of service than previous generations."