Auto Seats Moving Up In The World 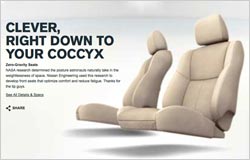 It's the part of a car in which you spend the most time in physical contact, but it's the Rodney Dangerfield of consideration points, at least in mass market vehicles: if it’s good, you don't notice it; if it's bad, you won't buy the car, regardless of how great the other features are. We're talking car seats.

While they have traditionally been a strong focus in luxury and especially performance automobiles, they have been nearly commodities in mid-size, compacts and sub-compacts. No longer. As seats benefit from automakers' focus on making compact and sub-compact cars more premium, seats are getting souped up. Nissan, for instance, is putting a lot of its marketing spotlight for the new Altima on the NASA co-developed Zero Gravity seats within.

According to new research from J.D. Power & Associates, small-car buyers are getting seats with more features than previous models, and they are more satisfied. It's not a small consideration, since market share for compact and subcompact models has grown to 35.4% in the first seven months of 2012 from 32% during the same period in 2011. The firm notes that 27% of new-vehicle owners replaced their vehicle with a smaller 2012 model.

J.D. Power’s 2012 U.S. Seat Quality and Satisfaction Study says that along with compact and sub-compact car sales growth, market penetration of more sophisticated seat features in those vehicles has also increased. Heated seats, once the realm of premium cars, is 16% more prevalent in smaller vehicles than they were four years ago. The penetration of leather seats in that period is by 10 percentage points, and memory seats by 3 percentage points. The even more traditionally high-end feature -- cooled and ventilated -- is up in small-car penetration by 2 percentage points.

Seat satisfaction among compact and subcompact vehicle owners averages 7.5 points on a 10-point scale -- which is, per the firm, significantly higher than the 2008 study, as are ratings for seat material conveying an impression of quality.

In something of an auto feedback loop, as consumers become more and more technologically sophisticated and compacts become more premium-quality gear, car shoppers are coming to expect more and better from smaller and cheaper. Says Mike VanNieuwkuyk, executive director of global automotive at J.D. Power and Associates: "A vehicle's interior has been growing in importance to vehicle owners, and seats are paramount to driver and passenger comfort." In addition, the firm's Initial Quality Study earlier this year found interior comfort is the second-most-common reason owners cite for selection of their new vehicle.

VanNieuwkuyk tells Marketing Daily that the rethinking of things like seats follows a consumer migration from larger and more premium vehicles to the lower end of the market, and smaller, gasoline-stingy cars. "They are bringing the expectation that they will get better fuel economy without having to compromise on features," he says. "The industry notices that."

Also giving former wallflower features like seats some limelight is the fact that vehicle quality is no longer the major differentiator it was, as the differences between vehicles in that regard have become razor thin. VanNieuwkuyk points out that now -- as most vehicles are equally well built -- quality is an expectation, not an option. "So shoppers are now looking at other things. And since consumers now spend about 18.5 hours per week in their cars, interior is now number two; it plays a major role and the seat is the one thing you are constantly in contact with.