'Forbes' Reports 50% Of Revs From Digital 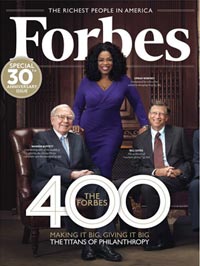 While the tipping point was predicted a few years ago, 2012 is the year. For the first time, half of Forbes, Inc.’s revenues will come from its digital businesses, according to Meredith Levien, the business media company’s chief revenue officer.

In a conversation at the American Magazine Conference, Levien was quick to point out that this proportional increase isn’t a result of shrinkage on the print side. Forbes' print revenues are also up, thanks to a 12.5% increase in ad pages in the first nine months of the year, per the Publishers Information Bureau.

That compares favorably with rivals in the business category like Fortune, down 2.4% in the same period; Inc., down 6%; and Money, down 6.4%. (For the magazine business as a whole, ad pages are down 8.6% in the first three quarters.)

Forbes’ digital revenues are up 27% through the month of August.

Although Levien declined to share dollar figures, she credited the strong growth to a variety of initiatives, including the company’s BrandVoice product, which allows marketers to create custom content on the site; bigger, more interactive ad formats, including IAB-blessed “Rising Star” units; and its embrace of programmatic selling, making online inventory available for public bidding on the company’s own ad exchange, the Forbes Audience Network.

Levien also touted Forbes’ adoption of third-party tracking to verify visibility and engagement for online advertising, including services offered by Moat and comScore.

Digital ad revenues are growing in tandem with digital audience, including an increasing proportion referred via social media, according to Levien. The overall number of unique monthly visitors to Forbes.com increased 49% from 22.4 million in September 2011 to 33.4 million in September 2012, according to Omniture, and comScore figures for August 2011-August 2012 show a 58% increase from 12 million to 19 million.

advertising, digital, magazines, revenue
1 comment about "'Forbes' Reports 50% Of Revs From Digital".
Check to receive email when comments are posted.
Next story loading