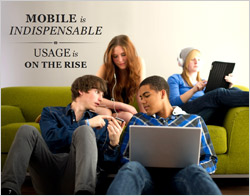 A new AdReaction study on mobile marketing from Millward Brown units Dynamic Logic and Firefly presents a paradox: People don’t like mobile advertising but research suggests it’s more effective than online advertising. The report concludes that mobile represents an opportunity for marketers but that mobile sites, apps and ads too often fail to meet user expectations.

"That's the most interesting dichotomy of this study -- the lack of satisfaction with mobile advertising, but the desire for it to succeed,” said Joline McGoldrick, research director, Dynamic Logic. “Consumers want mobile ads to target them effectively."

According to the AdReaction study, only 9% of Americans surveyed view mobile advertising very or somewhat favorably, putting it on par with non-opt-in emails. It lands at the bottom of a list of eight online ad segments, including opt-in display (28%), online display (22%) and online video (16%).

Attitudes toward mobile advertising have hardly improved since 2009, when 7% expressed a favorable view of the ad category. When asked about specific ad formats on smartphones and tablets, the figures were somewhat better, especially for tablets. Mobile display ads on smartphones, for example, were viewed favorably by 13%, and by 16% on tablets.

Americans as a whole take a dimmer view of mobile advertising than those in other countries. In the U.S., the disconnect stems from users' assumptions that mobile will work as well as the desktop Web, will target messages accurately and will offer an exchange of tangible value.

“Consumers are asked for too much personal information, mobile apps and sites aren't working as expected or desired, and mobile marketers are not targeting effectively, which leads to unfavorable attitudes toward mobile advertising," said McGoldrick.

The new AdReaction study also found that a third of study participants had taken action in response to mobile advertising and a third said receiving deals or promotions on mobile improves their opinion of a brand. Based on its findings, Dynamic Logic and Firefly put together a set of seven “principles,” for marketers to follow in mobile.

These include recommendations such as making messages contextually relevant, focusing on engagement, playing to mobile’s strengths as a personal and portable medium, and providing value in return for access to consumers’ mobile phones. In that vein, deals and coupons were the types of things people wanted to see most (44%) from brands on their mobile devices.

The AdReaction 2012 study was based on online surveys of more than 6,000 smartphone or tablet users in Brazil, Canada, China, France, Germany, India, Italy, Kenya, Mexico, Nigeria, South Africa, Spain, Turkey, UK and the U.S. It also included qualitative research (online forums and in-depth interviews) in most of those countries, including the U.S.