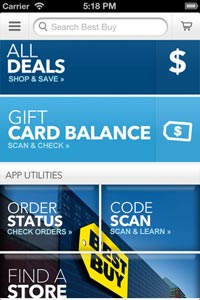 A new survey from BDO reports that this holiday season, the largest retailers are getting the hang of both social and mobile, and working the brick-and-mortar angle to their own advantage.

“Whether it’s Best Buy, Target, Walmart or Toys R Us, we’re seeing that brick-and-mortar stores have learned to adapt and even embrace the mobile shopper,” Stephen Wyss, partner in BDO’s retail and consumer product practices, tells Marketing Daily. “They are starting to see that they have an advantage. Once a consumer is in their store, they are ready to buy. They have already done their research, and even if they are, to some extent, just 'showrooming,’ it gives stores the opportunity to close the sale. Consumers often want that sense of immediate satisfaction, and with things like price-matching, stores this year are doing a great job of offering mobile shoppers a good deal they can have right now.”

BDO’s survey finds that of the CMOs at the 100 largest retailers, more than half are now including mobile in their marketing plans, “showing that many are still playing catch-up to the dramatic growth in mobile use.” (Last year, 39% of the CMOs reported using mobile.) Favorite mobile efforts include flash sales and daily deals (the No. 1 mobile priority for 30%) followed by text messages (23%) and mobile coupons (20%.)

In some ways, social media has been even more transformative, with 86% of the CMOs reporting that this year, they are incorporating social into their strategy. And they are not just throwing up Facebook pages: The group reports that social now accounts for about 10% of its marketing budget.

In fact, digital’s share of holiday promotional budgets is increasing, despite 67% reporting that overall marketing spend is flat this year. Print advertising is still tops for 42%, but 31% say their plan calls for spending the most marketing dollars online, representing a 35% jump from those who said that in last year’s survey. Broadcast spending is the biggest expenditure for 22% of CMOs, down a bit from last year.

The survey also revealed that the vast majority are swimming in data, with 93% saying they find it a challenge to integrate and manage all their data, and 40% describing it as “very challenging.”

“Retailers have really learned some lessons,” he adds, “and realized mobile and social can be big drivers. They are really making mobile, including the apps they’re developing, a nice shopping experience for the customers, making great use of the larger smartphones consumers are using. We all thought mobile would do well for retailers this year, but it’s been fantastic -- even more than most expectations.”

And across all social efforts, he says, “the common denominator is building brand image and brand loyalty.”