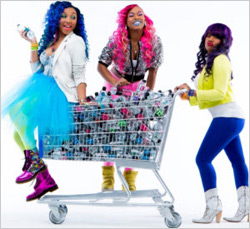 WAT-AAH!, a functional water brand for kids created by a New York City mom to make drinking water “cool” to kids and teens, is partnering with teen pop group OMG Girlz --the first of several teen-celebrity brand ambassadors planned for a national TV, retail, print and digital campaign in 2013.

The brand -- founded by former advertising executive Rose Cameron in 2008 based on input she got from her own kids in her quest to create a water drink that they would embrace -- is now one of North America’s fastest-growing water brands, sold in more than 10,000 stores across the country, including Whole Foods Market, Albertson’s, Shop-Rite, Food Lion, Shaw’s and Kroger (as well as in 3,500 U.S. schools/school districts), Forbes reported last month.

The growth has been driven in no small part by WAT-AAH!’s hook-ups, from its inception, with teen celebs and their health-oriented causes. For instance, the brand was the exclusive beverage sponsor of Beyonce's "Let's Move! Flash Workout" in 2011 and 2012, created by the pop star with the National Association of Broadcasters Education Forum and various U.S. school associations.

The 2013 campaign kickoff includes a limited-edition OMG Girlz-designed bottle, with sales proceeds going to the group's charity, OMGCares. OMG Girlz will also participate in WAT-AAH!’s cross-country “Healthy Hydration in the Nation Tour" (to build awareness of healthy hydration among U.S. school kids) and its "Move Your Body" event (to encourage U.S. kids and teens to dance, exercise and “drink healthy”).

In addition, the OMG Girlz will be among the judges for a national, Web-based youth talent show sponsored by the water brand, dubbed "Show Me WAT-YOU-GOT!," and will be featured -- along with other teen celebrities -- in a Fall 2013 national back-to-school health/anti-obesity PSA campaign (TV, print and digital platforms) sponsored by WAT-AAH!.

Footage from the group’s announcement of its partnership with WAT-AAH! is on YouTube, and fans are being encouraged to engage around OMG Girlz and the brand by tweeting @WATAAH and @therealomggirlz with the hashtag #OMGLOVESWATAAH.