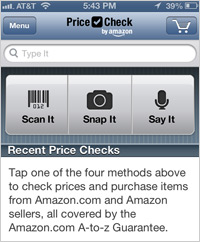 According to the editor of Consumer Reports ShopSmart magazine, “there's almost no excuse for not getting the best deal on an item anymore.” And that is mainly because mobile technology has made deal hunting so easy.

In fact, shopping apps themselves have become a cottage industry and the magazine has done its own product comparison of the tools that mobile phone users have at their disposal. In an almost tiresome sort of way, Amazon continues to come out on top. Its Price Check app was deemed best in class. Not only does the app allow the user to look up an item via its barcode, voice search, or simply a camera image, but it also invites users to share the in-store price with others. In essence, Amazon is trying to create a guerrilla army of bargain hunters within retailers' walls.

It is interesting that most of the apps named by the magazine among its top five go back quite a ways. Both RedLaser, which is now owned by eBay, and ShopSavvy were among the earliest apps that mobile users embraced. ScanLife, from the company ScanBuy, is also a long-standing app. In an app universe where there are literally hundreds of thousands of choices, most of them free, it is rare to see any apps show persistent popularity across several years. All of these apps have evolved new features and new directions since they began. Rounding out the list is the app Smoopa, which gamifies the bargain-hunting experience by rewarding users who find the lowest in-store price with redeemable gift cards.