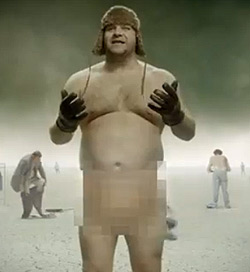 Specialty retailer Destination XL is Super Sizing itself, and not everyone is comfortable with its frank depiction of big and tall guys: In order to get its new “No Man’s Land” spot on the air, it had to create two separate versions.

The company is in the midst of its transformation from Casual Male to Destination XL, and the big-and-tall apparel retailer is tripling the size of its stores as it rebrands, and more than doubling its product offerings. The national ad campaign that shares the news with consumers, however, is proof that the world is still not loving the big guys: Fourteen out of 19 cable networks rejected its humorous spot as offensive.

The ad shows a bunch of scantily clad big guys, hanging out in a windy kind of limbo -- some have shirts, but no pants, for example, illustrating how difficult it can be for these guys to find a single article of clothing that fits, let alone a whole outfit. “Finally, something in my size! Gloves!,” exults a naked large fellow, with his privates adequately pixelated. While that version is running on five networks and online, the company had to shoot another version, with the man in underpants, to get clearance for 14 others.

“Once again, it’s showing how this bigger man is just not treated equally,” CEO David Levin tells Marketing Daily. “So he’s not a hunky guy, and he gets dismissed -- even though I see all kinds of pixelated private parts, even in prime time.”

Destination XL Group, the only national retailer in this category, has so far created 54 of the new Destination XL stores, which started with a four-store test back in 2010. Levin says the company expects to have between 105 and 112 stores by the end of the year, and more than 200 stores when the brand transformation is completed by 2016.

Levin says the company is spending $5 million on the spring effort, with 35% of that going to radio spots airing in sports programming. And in addition to the TV spots, there is a considerable digital and outdoor push as well.

In social media, it has kicked off a “Bigger Gets Better” initiative, inviting big guys to share their woes, from too-tiny airline seats and passenger cars to ill-fitting pants, via Twitter. (Online initiatives are especially important, he says, because 20% of the chain’s business comes from online sales. “Not surprisingly, since there are so few places for them to shop, e-commerce is very important to them,” he says.)

A new version of the campaign is scheduled to begin airing in the fall, with an as-yet-unannounced budget.

The heart of the marketing effort, Levin says, is based on simply being nicer to these beaten-down shoppers, including upgrading sales helps in stores, widening aisles, adding big-screen TVs and enlarging dressing rooms, and passing out bottled water. And because they have so long felt like second-class shoppers, despite accounting for 40% of the adult male population, Levin says the company has paid a great deal of attention to selection -- expanding to include such higher-end brands as Calvin Klein, Lucky and Lacoste.

“I’ve seen guys tear up when they come in the new stores for the first time,” he says. “It’s like that moment in ‘The Wizard of Oz,’ where the world turns to color; it’s that powerful.” He says the company’s research has found that 90% of those who shop at Destination XL become repeat customers.

With its expanded selection, the chain is especially targeting a consumer known as “the end of the rack guy.” With a waist between 40 and 46 inches, he can’t quite fit into regular sizes, but doesn’t regard himself as a big and tall shopper. And while that group accounts for two-thirds of all large men, it only represents 25% of the company’s business. “So there’s a lot of opportunity,” Levin says. “It’s a very exciting time for us.”