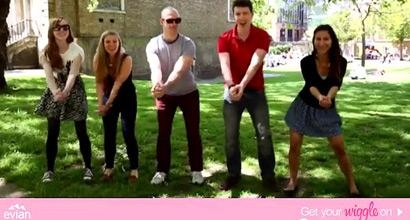 <
Evian -- no slouch at driving buzz during the Wimbledon tournament -- has come up with another novel approach this year.

Starting June 17, tennis fans across the U.K. can submit videos doing their own versions of the "Wimbledon Wiggle" -- the "cheeky shake" that players make before receiving a serve -- for a chance to win a grand prize of two primo tickets to the tournament on Saturday, June 29.

This isn't a sweeps -- the prize is to be awarded by a judging panel based on which video, in the judges' estimation, best expresses Evian's "Live young" brand marketing theme through a Wimbledon wiggle, according to the official rules.

Entrants can post their wiggle videos on www.wimbledonwiggle.com, which links to a dedicated area of Evian's U.K. Facebook page.

To inspire them, the site features a You-Tube hosted wiggle "demonstration" video created by Evian (from parent Danone Waters UK & Ireland Limited) with global social media agency We Are Social.

The video features people of all stripes wiggling to an original soundtrack composed by electro-hip hop artist Tigermonkey (the soundtrack can also be downloaded free from the site).

The site also features a gallery of videos entered by Wimbledon fans.

In addition, the best wiggler videos will be featured on digital outdoor creative at London locations where Evian has partnered with Land Securities’ annual Great British Summer campaign to broadcast free, live coverage of the action on Centre Court.

Wiggling aside, Evian's Wimbledon executions include: special "Wimbledon whites" packaging featuring brand ambassador Maria Sharapova; a "Baby and Me" ad campaign (tying in with the "Live young" theme) that features Sharapova alongside her "baby self"; a brand-sponsored microsite on Wimbledon.com featuring the latest gossip, photos and exclusive videos from the tournament; in-store activations at leading grocery, drug and other mass retailers; Evian sampling at the Southfields underground station; Evian flags displayed throughout Wimbledon village; an Evian-themed Wimbledon cafe inside the grounds; and a Wimbledon style guide plus a ticket competition on My-Wardrobe.com.