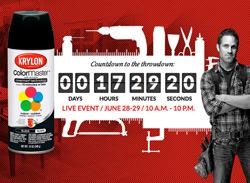 The company also makes paint for everyone else, and is launching a campaign to focus on its Krylon ColorMaster line, and the Covermax technology it uses. The division of Cleveland-based Sherwin-Williams Paint and Sundries Brands is doing an online and social media promotion, which is also the first work from new AOR, Marcus Thomas. Usually the ad agency is behind the curtain, but, in an unusual move, "The Krylon ColorMaster Challenge" actually spotlights the agency's offices for a reality TV-style, home improvement-type makeover.

The effort, which happens June 28-29, features Jeff Devlin, host of DIY Network’s “I Hate My Bath,” redoing the agency's Cleveland office. He will do 24 home improvement projects over the 24 hours there, using the paint line as part of the upgrades. Per the company, the entire event will be live-streamed, at colormaster24in24.krylon.com.

There will be 24 beginner-to-expert projects in which Krylon spray paints play a part such as a doghouse, a Mason jar herb garden, and a picket fence. Plans for each are downloadable in advance. Devlin will also answer viewer questions via Twitter.

Per Krylon, the promotion is meant both to generate brand awareness for the new product via the online live streaming, and also to build an archive of online DIYcontent that will inspire spray paint usage and improve Krylon’s user search results.

As part of the campaign, visitors to the site can upload their project images and how-to's now until Sept. 2 to ProjectsInACan.com for a chance to win a $500 weekly prize or the $2,000 grand prize, per Krylon.

Paid media pre-event advertising, via New York-based Collective, includes banners on the home improvement vertical sites like DIYNetwork, HGTV, and also on Pandora. During the event, the banners will run the live-streamed video and social extensions. One can also tweet directly from the banners, which will stay live and run the video content after the event. There's a paid search and SEO element as well.

The company says it is targeting male DIYers ages 25 to 54, who are into home and garden improvement, and females in the same age bracket with arts and crafts interests.