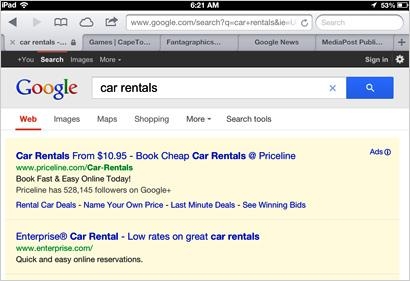 The migration of user habits and marketer attention beyond the desktop (along with Google's new bidding model) has led to a quarter where the average cost per click on paid advertising to tablets exceeded ads sent to the desktop. According to the latest measures of their own clients' campaigns across multiple segments in Q2 2013, the Search Agency’s quarterly report pegs tablet CPCs on Google ($.86) running 1.7% higher than the average CPC on the desktop ($.85). In the last quarter, tablet CPCs ran on average three cents lower on tablets.

CPCs were up overall for Google (+21% quarter-over-quarter), but tablet CPCs were up 26%. The overall trajectory of spend was moving toward devices. Across all search engines, tablets increased their share of spend from 10.6% to 11.2%, and mobile from 12.7% to 14.2%, while desktop declined from 76.5% to 74.5% quarter to quarter. Desktop share has decreased 12.5% since the same quarter last year, but smartphone share ballooned 70.4% and tablet share 74.7%.

Some of the acceleration in tablet spend is being fueled on Google by the arrival of Enhanced Campaigns that place search ads across all screens and treat tablet and desktop as the same target. Enhanced Campaigns do not allow separate bidding on tablets. In fact, as The Search Agency tells Mobile Marketing Daily, the current discrepancy between desktop and tablet CPCs remains only because some advertisers were still able to bid on the three screens separately. Search Agency VP of Agency Products Keith Wilson tells Mobile Marketing Daily: “There are lingering differences because not all campaigns migrated or migrated partway through the quarter. In our Q3 report, we would expect Tablet and Desktop to be identical.”

While prices are up on tablets, actual click volume declined quarter-to-quarter (-8%) -- the first such drop. Clicks are still up 62% year-over-year, and the Search Agency warns that the quarterly drop may be a result of “matching or query mapping changes at the search engine.” Click share across devices has leveled, however, with 11% going to tablets, 16.3% to smartphones and 72.7% to desktop, generally within 1% of last quarter’s share breakdown. The full report is available from The Search Agency.