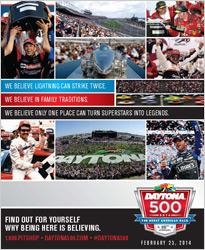 The Daytona 500 is likely as deeply etched in the American zeitgeist as are surfers and volleyball at Huntington Beach (even if you've never been to Huntington Beach.) And Daytona International Speedway is NASCAR mecca, and also gigantic, as anyone knows who has tried to walk from parking lot A to B.

More gigantism to come: the venue just launched a $400 million redevelopment called "Daytona Rising" that will range the Speedway's mile-long front stretch. The folks at the Speedway front office say the new extension has 40 escalators -- the most in any stadium -- 14 elevators, and new concourses, each the size of a football field.

The organization says that because of the sheer size of the project -- slated to be finished by 2016 -- the engineers had to figure the curvature of the Earth into their equations, which suggests there's a half decent chance it can be seen from space. The amount of steel to be used is about 1% of the U.S. annual steel output (although, to be fair, we don't make that much these days.)

The Speedway is also launching a new marketing campaign via St. Louis-based Jump Company to tout the venue and build steam for the upcoming Daytona 500. Sean Belgrade, VP marketing of the Daytona International Speedway, tells Marketing Daily that the new campaign -- featuring the likes of Richard Petty, Dale Earnhardt, Jr., and Jeff Gordon -- diverges in tone from past efforts. "We typically used more stock footage for the campaign. The difference this year is we decided to film seven [Daytona 500] champions." He says the effort comprises one 30-second spot, five 15-second cut-downs, a 10-second cut-down, as well as a pair of radio ads, print pieces including newspaper, digital and out-of-home.

Belgrade says the TV buy is on Fox Sports, ESPN, ESPN2 and regional buys on sports broadcasts on Fox -- much of it made easier by a recent landmark deal with Fox and NBC. The campaign is intended to be national in scope, as per Belgrade, 60% of race attendees come from outside the state and one of the big markets is the Northeast. "Some of our biggest markets are New York, Philadelphia, Boston, and Washington, D.C.; they are all top DMAs."

The Daytona 500 also typically brings in a more affluent crowd than other NASCAR events, since it's more expensive to travel there, notes Belgrade, who says it is also a family draw (Daytona is on the Atlantic coast with tourist draws like St. Augustine and Cape Canaveral to the north and south, respectively.) A spokesman adds that the Speedway expects to work with Visit Florida to help promote the venue project, "And has already started that process with them. The Speedway also has a very good working relationship with its local Convention and Visitor's Bureau and Visit Florida."

The goal, at the end of the day is to drive ticket sales and packages, says Belgrade, "but more importantly, it helps deliver on the 500's status status as the great American race and the speedway as hallowed ground."