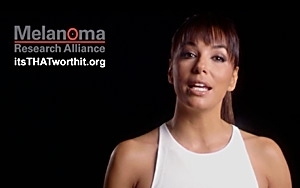 L'Oreal Paris has tapped Eva Longoria, Aimée Mullins, Lea Michele, Diane Keaton, and L’Oréal Paris executive Danielle Macaluso to talk about melanoma, the most dangerous form of skin cancer and a malady whose incidence is increasing fast, especially in the U.S. The company has signed a three-year partnership with the Melanoma Research Alliance (MRA) to drive funding and to raise awareness in the U.S. of the risks and ways to lower them.

The cosmetics and skin care company is launching a campaign called "It's THAT Worth It" to warn Americans to cover up, use sunscreen, and not to take sunlight lightly. L’Oréal Paris is also donating $750,000 to MRA to help find a cure and to fund the L’Oréal Paris-MRA Team Science Award.

The first phase of the campaign comprises celebrity broadcast and print PSAs that drive viewers to www.ItsTHATworthit.org to join the global crowdsourcing tool Thunderclap. The tool aggregates messages to amplify a single call to action. For each supporter who signs up for the Thunderclap effort, the company will donate $1, and will also donate a dollar for each L’Oréal Paris Advanced Suncare product sold in the U.S., up to $250,000 in 2014.

On the broadcast and video side of the campaign, Longoria is doing both a Spanish and English-language PSA. Otherwise, each spokesperson is doing one PSA. The effort also comprises print and online elements. Macaluso, who herself has been treated for melanoma, was involved with developing the relationship with the MRA from the get-go. She tells Marketing Daily that the partnership, inked last year, comes a year after L’Oreal launched its Advanced Sun Care line of products. "We saw it as a perfect match." She adds that, ironically, she was diagnosed with the disease while involved with marketing the new Advanced Suncare line.

According to Project Melanoma, a non-profit advocacy group melanoma’s incidence is rising faster than that of any other kind of cancer. It rose 50% between 1980 and 2004 among Caucasian women. The organization says it is the most common cancer in women ages 25 to 29, the number-one cancer killer of women ages 30 to 35, and is the second-most common form of cancer for adolescents and young adults between the ages of 15 and 29.

Macaluso, who says the U.S. last year became the number one nation in melanoma incidence, says one reason for its rise is lack of awareness of the risks vis-a-vis UV exposure, including tanning beds. The problem, she says, is exacerbated by the fact that dermatologists aren't a fixture in rural areas. "They tend to practice in big cities like New York and Los Angeles."

She says Keaton [who is a melanoma survivor] was first on board with the campaign. “She is a huge sunscreen advocate, so when we approached her with the idea she was thrilled to be part of it. Mullins and the others have not had the disease but were very excited about idea of participating."

The effort, targeting women 18 to 55, will get media placements in both younger-skewing media and media that appeal to a wider age range. "While melanoma is young person's disease, there are a lot of factors involved. If you had skin cancer in the past, you are more susceptible to getting it again. So it's important to keep tabs on it."