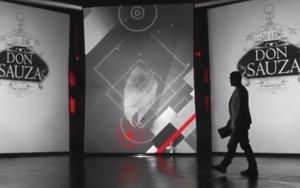 Justin Timberlake is starring in the digital advertising launch campaign for Sauza 901.

No surprise there: Timberlake actually founded the super-premium tequila 901 in 2009, and continues to be a co-owner with Beam Suntory, Inc. of the now co-branded, rechristened Sauza 901, which has just reached retail shelves nationwide.

The campaign is dubbed "Premium Remastered." In its videos, created by La Comunidad and directed by Piccadilly Curtains, Timberlake says that Sauza 901 represents old-master premium values, as originated by Don Sauza, "the Father of Tequila," remastered in a modern  tequila. In the first (mostly black-and-white) video, Timberlake alludes to inspirational phrases supposedly taken from Don Sauza's recently rediscovered (fictional) diary, with futuristic-looking graphics helping to make the link to the present.

The Millennials being targeted by Sauza 901 are “looking for brands that have a story,” Beam Global CMO Kevin George noted to The Wall Street Journal. “The challenge is telling a history of a brand without giving a history lesson. You need to do it in a modern way.”

Sauza 901 is driving consumers to the campaign videos via its own Twitter (currently showing 15,700 followers) and Facebook pages and, to a lesser degree, through its YouTube and Instagram assets, reports Gary Ross, senior director of tequilas and Beam Suntory.

Of course, the brand's biggest marketing advantage is the ability to leverage Timberlake's own huge social network followings. They include more than 36 million Facebook fans, 32 million Twitter followers and 4 million followers on Instagram -- where he recently made the surprise announcement that he's featured as a collaborator on a single in the new, posthumously released Michael Jackson album "Xscape." (That's not counting the 900 million-plus views of Timberlake's 44 videos on VEVO.)

The Sauza 901 campaign's paid placements include photo and video ads in consumers' Facebook newsfeeds, promoted tweets and search ads on YouTube, Google and Bing that drive consumers to Sauza901.com.

The campaign also includes in-store sampling, on-premise events, and a sweeps/ concert promotion. Consumers who purchase a 750-ml bottle of Sauza 901 (suggested retail $29.99) will receive five free song downloads, and those who just try it (no purchase necessary) will receive one free song download. Those participating in the promotion (entry period is June 1-Aug. 21) in either of those two ways will be entered into a sweepstakes with a grand prize of a trip for two to Timberlake's concert in Iceland on August 21.

In other brand news, Sauza recently launched the third phase of its "Make It" campaign. The campaign employs tongue-in-cheek videos featuring blue-collar hunks saying all the right things about being sensitive to women's feelings as they demonstrate how to make cocktails with Sauza.

The campaign started in 2012 with “Make It With a Fireman,” which became one of YouTube's most-watched videos of the year. That was followed last year with a "Make It With a Lifeguard" sequel. Together, the videos have generated more than 18 million views to date.