Samsung Has No Trouble With The Curve 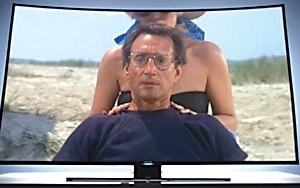 Advertising a new technological advance through old technology devices can always be a challenge, particularly when the medium (and technology) is as visual as television. Rather than tout the bells and whistles of its new curved-screen, ultra-high-definition [UHD] television, Samsung looks to play up the emotional experience the device creates to convince consumers of its benefit.

“Most consumers think, ‘I’m good with what I have,’” Peggy Ang, vice president of marketing communications at Samsung Electronics America, tells Marketing Daily. “We think we have a great opportunity [to show something better].”

To tout the emotional experience, a new campaign (“The Curve Changes Everything”) stitches together moments from iconic films, television shows and other programming to show how the new set, which is curved like a movie screen and offers four times the resolution of traditional high definition screens, draws the viewer in.

A new television commercial, from agency 72andSunny in Los Angeles, begins with scenes from “Clueless,” “Jurassic Park,” “The Fly” and “Trouble with the Curve” to create anticipation for the new technology. After showing off the curved frame (and a boy watching the screen), the commercial shifts to scenes from“Back to the Future,” “Tommy Boy” and Carl Sagan from the original “Cosmos,” declaring, “the greater the curve, the bigger the difference.” Shots from “Jaws,” sports, and other programming highlight the screen’s immersive abilities before cutting to George Clooney in “Gravity” looking at the Earth and saying “you can’t beat the view.” The spot closes with Will Ferrell in “Zoolander saying, “it’s beautiful,” before cutting to Kevin Costner in “Field of Dreams,” saying, “It’s more than that. It’s perfect.”

“The images we put on the screen highlight the essence of [UHD],” Ang says. “While they may not be images in [UHD], they communicate the value of the [UHD] technology.”

With all of the stars, scenes and programming, one might think putting together the 60-second commercial (directed by “Looper” director Rian Johnson and shot by Oscar-winning cinematographer Claudio Miranda) would have been a nightmare of negotiations and back-and-forth with attorneys. That was not the case, Ang says.

“The [licensing] process was not as bad as we thought it was going to be,” Ang says. “When we went out to the studios, we showed them storyboards and rough cuts, and we got very positive responses.”

In addition to the television commercial, which began airing this week, the campaign will include print, digital and out-of-home executions. In two markets (New York and Los Angeles), Samsung will use outdoor space to mount large versions of the curved screen to show how it can be displayed in the home. The most common question about the curved TV, Ang says, is whether it can be hung from a wall like flat screens.

“We’re going to create curved structures against buildings,” Ang says. “We need to show people how it’s so elegantly designed that those questions are not really questions.”