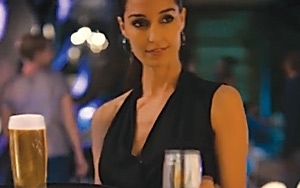 The campaign, called “Legendary Biru,” is geared at “contemporary consumers” who drink other premium imported beers. The demographic is described as creative professionals between 25-35, male, who likes to try new things, are stylish, cultured and metropolitan, said a representative from Sapporo.

The 30-second TV spot, which broke this week, aims to establish Sapporo as a modern beverage with traditional Japanese elements. The campaign also includes digital and out-of-home advertising, social media and public relations.

The campaign was created by the brand's agency, Montreal-based DentsuBos.

“We are excited to launch our most ambitious marketing campaign in the U.S. to date,” said Tsukasa “Louis” Orui, president of Sapporo USA, in a release. “Sapporo’s share of the Japanese beer market in the U.S. now exceeds 50%, and the time is right to invest in building a new level of brand awareness, volume and market share.”

The spotwas shot in Cape Town, South Africa. It was produced by Imaginary Forces, and features music and sound design by Vapor Music.

“We set out to position Sapporo as a brand for today’s premium beer drinkers, while honoring its colorful Japanese heritage,” said Claude Carrier, president and CEO, DentsuBos, in a release. “The campaign juxtaposes ancient and modern elements to show how Sapporo infuses every environment with the intriguing exoticness of Japan.”

The 30-second spot will run on Comedy Central, Discovery, FX, ESPN, A&E, AMC, History and Spike in New York, Los Angeles and San Francisco from through June and is complemented by digital advertising on Hulu, YouTube, Thrillist and UrbanDaddy.