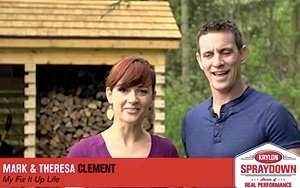 The program, running through Sept. 20, stars DIYbloggers and website editors in a series of three 13-minute reality shows.

The effort, via Cleveland-based Marcus Thomas, is hosted by Mark andTheresa Clement from MyFixitUpLife.com and includes a dedicated website. In each episode, hosted on YouTube and the web site, the couple are joined by other DIYbloggers: Gail Wilson of MyRepurposedLife.com; Beckie Farrant of InfarrantlyCreative.net; Liz Latham of HoosierHomemade.com; and Mike Warren of Instructables.com.

The launch episode has the pair at contretemps over which grownup toy they'll use when they do fix-ups that will save the money for him to get a mountain bike and her to get a hammock. In the video, they use the paints as part of the process of fixing shelves, mailbox, table and chairs, and shutters. Specifically, the videos feature Krylon Dual Superbond Paint + Primer.

The Cleveland-based company says the second and third episodes are still in production, but they will feature Krylon’s ColorMasterT Paint +Primer, and Krylon Rust Protector, respectively. In one episode a social media element asks voters to decide the winner of a fix-off between Mark and Beckie Farrant against Theresa and Liz Latham.

The shorter works comprise seven plot-free project videos, each about 90 seconds and focusing on products like Krylon’s glow-in-the-dark paint, high-heat paint, and a DIY camouflage mix.

The company says a media buy with AOLDigital will put ads on up to 100 DIYsites including Coastal Living, and Martha Stewart. They will also be on HGTV and DIYNetwork. Each of the ads plays a 30-second video from one of the episodes. A click leads viewers to the full episode. And, per the company, there are Facebook news feed and video ads, pre-roll videos, static banners and SEO and SEM.