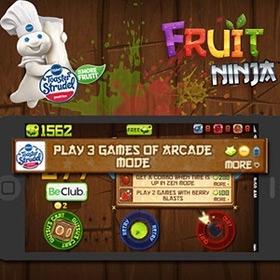 As part of a campaign to build awareness of its new recipe with more fruit filling, Pillsbury Toaster Strudel has partnered with Halfbrick, the makers of the popular video game app Fruit Ninja.

The "More Fruit" campaign, designed to reach moms and Millennials, also includes an integration on the Food Network's "Rachael vs. Guy: Kids Cook-Off," a national TV spot, and digital and social media elements.

With Fruit Ninja — a game in which the player tries to virtually slice fruit images thrown onto the screen — Toaster Strudel is sponsoring  in-app challenges, and videos with flying fruit that will play after each completed mission. Players will also be rewarded with Toaster Strudel coupons and other Fruit Ninja incentives. The sponsored in-app experiences launch Aug. 7.

In addition, the brand will host Fruit Ninja's first live "spectacle," at The Grove in Los Angeles, on Aug. 13. At the event, Guinness record-holding swordsman Isao Machii will slice fruit tossed his way by attendees, who will also be able to sample Toaster Strudel, play Fruit Ninja Kinect and pose for photos.

Pillsbury Toaster Strudel, launched in 1985, "is constantly listening to consumers, and they told us that they wanted more fruit in the filling" without changing the product's taste, Polly Madsen, the brand's marketing manager, tells Marketing Daily.

The partnership with Fruit Ninja, a favorite of both moms and Millennials, is an example of "engaging with our fans where they already live and play," Madsen says. She cites gaming industry research showing that 75% of moms play video games, and that gaming creates a bonding experience for families.

According to stats cited by Fruit Ninja, the game is the second-most-downloaded app of all time (500 million downloads since its launch in 2010), and is played by 70 million monthly active users.

The format for Toaster Strudel's integration on the Food Network's "Rachael vs. Guy: Kids Cook-Off," which is starting its second season this month, are short vignettes featuring teens being challenged to create recipes with Toaster Strudel and real fruit.

The vignettes (which have both 60-second and 30-second versions) will first air during reruns of episodes from the show's first season on the Cooking Channel on Aug. 16, and during the Food Network's Season 1 marathon onAug. 17. Vignettes will then be integrated in the prim-etime Season 2 premiere on Aug. 17. They will receive additional exposure on the network during August and September, including during three encore airings of the Season 2 premiere.

The vignettes will be promoted on Pillsbury and Toaster Strudel-specific social media, including the brand's Facebook page.

The brand's Food Network partnership also includes an online sweepstakes with a grand prize of a trip to New York to visit the Food Network headquarters and get a cooking demo, and an insert in Food Network Magazine featuring breakfast recipes made with the pastries and fruit.

The partnership will be promoted on digital and social media by Toaster Strudel, in addition to Food Network Channel promotions.

Toaster Strudel's new "Made with More Fruit" 15-second television ad launched Aug. 4, and will air nationally across networks and cable through the beginning of November, reports Madsen.

The "More Fruit" campaign will include paid digital advertising, primarily banner formats, running through the end of October.

Olson is the lead creative agency on the Fruit Ninja partnership. The brand worked with Saatchi, Bromley and Zenith on the overall “More Fruit” campaign.