Last month, McKinsey released an interesting study focusing on how patients around the world perceive digital technologies. McKinsey’s verdict: consumers want to use digital health tools, but hold back because “existing services don’t meet their needs or . . . are of poor quality.”

McKinsey’s conclusion that patients are eager to use the Web, mobile phones (SMS), video and other tools to navigate health and medical care is not surprising. Back in 2012, Accenture released a study suggesting that “90% of patients embrace eHealth self-service options (such as access to health information, scheduling appointments and prescription refills).” But, just as McKinsey would find later, patients were dissatisfied with current options.

No one should be shocked by the fact that patients (even older consumers) want to use digital technologies to manage their health. Rather, what’s more shocking is that many hospitals, physicians and others in the United States are not employing digital tools more aggressively. In the United Kingdom, for example, increasing numbers of physicians are using video conferencing to sharply reduce the time it takes for patients to be seen for routine or non-emergency care. Companies like Walgreens are giving their customers digital tools that enable them to engage in healthy behaviors and conduct routine medical tasks.

So, why should the average marketer care that many health plans, hospitals and physicians are not meeting patients’ digital needs? Well, there are many reasons, but I’ll briefly talk about two. Hint: they’re both all about saving money.

In this era of accountable care and value-based medicine, improving outcomes and saving money is the name of the game. It turns out that going digital could potentially save billions. For example, Towers Watson released a report this month suggesting that swapping face-to-face care for telemedicine (i.e., video conferencing) for “non-emergency health issues” could save up to $6 billion.

Also, telemedicine could become even more effective if companies like Apple succeed in their goal of helping consumers collect, aggregate and share vital medical information with health institutions and providers via mobile. (See the latest on Apple’s HealthKit and its partnerships with hospitals like Mayo Clinic and electronic medical records giant Epic.)

While saving money is critical, making it is even more vital. Marketers spend a lot of time trying to influence health consumers’ choices. We’ve found that not going digital could hurt hospitals, physicians and health plans in the wallet.

Research we conducted among digitally savvy health consumers (i.e., they use the Web and social media for health purposes) tells an interesting tale. 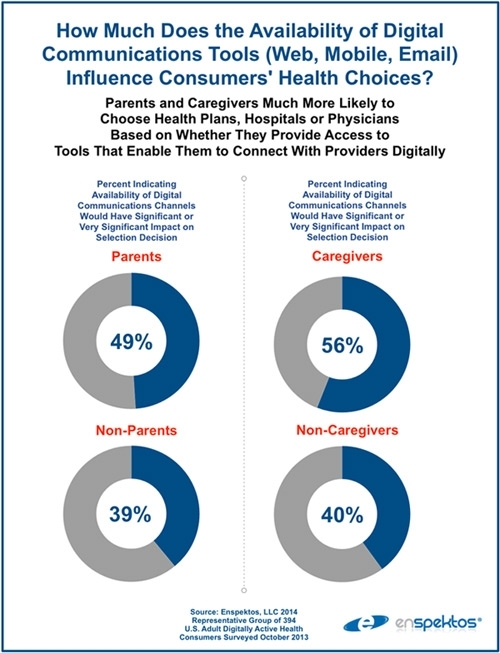 The graphic above summarizes some of our data. First we looked at whether digitally savvy health consumers would choose health plans, hospitals or physicians based on whether Web, email or mobile provider-patient connection tools were available.

Then, we looked closely at two critical consumer segments: parents and caregivers, as they drive a lot of medical decision-making. Both groups told us that having the ability to connect with health and medical professionals digitally would influence their selection of plans, doctors or hospitals — especially when compared to non-parents and non-caregivers.

I’ll leave you with this thought. Evangelists at health organizations have long said that going digital is important because patients want these tools. Now, they can argue that it’s a matter of dollars and cents.