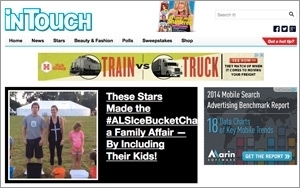 Celebrity weekly publisher Bauer Media U.S. has created a new division within the company focused on the publisher’s digital assets, with an eye to expanding its online offerings. Among other things, the new digital media group, called Bauer Xcel Media, will develop new products catering to the rapidly changing media consumption habits of teens and young adults.

The division’s first major project, the re-launch of InTouchWeekly.com, is scheduled for September. This follows last year’s re-launch of multiple Bauer Web properties targeting the teen audience, including J-14.com, M-Magazine.com, and Twistmagazine.com, all of which debuted new versions in June 2013.

According to Bauer, the total traffic to its various teen sites has more than tripled over the last year -- from 1.4 million unique visitors per month to 4.5 million -- while the traffic to InTouchWeekly.com has increased around sixfold, to 4.4 million, and LifeandStylemag.com’s visitors increased almost tenfold to 5.3 million.

Overall traffic to the company’s Web properties has jumped around 350% to 15.6 million unique visitors per month.

Hubert Boehle, CEO of Bauer Media U.S., stated: “Bauer is the market leader in print in many countries and the No. 1 seller of magazines at retail in the U.S. We are confident that Bauer Xcel Media will bring that same success to our online business as we continue to evolve and grow in all areas of media.”

Bauer is also pushing ahead on the print side. In October 2013, the publisher launched a new celebrity weekly, Closer Weekly, targeting women ages 40 and up with a mix of celebrity and lifestyle content and a “feel-good” editorial philosophy. The company also launched “Celebrate for Women” and “Girls’ World” around the same time.