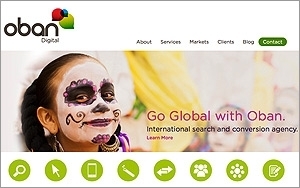 Trina Hymes has joined Oban Digital in the newly created position of VP of U.S. sales to run operations initially from North Carolina. Prior to joining Oban, Hymes worked for WebSourced, ChannelAdvisor, and Vocus.

Most U.S. companies know how to run campaigns on Google, Bing and Yahoo in the United States, but companies need to approach campaigns running on search engines in Russia, China, and Korea very differently.

Alibaba's move into the United States and China's economy has promoted U.S. companies to launch an Internet presence overseas without thinking through the nuances. Greig Holbrook, founder and managing director at Oban Digital, believes many companies have a global presence, but not international. He says this is a big difference.

The shift also signals an improving U.S. economy. "When there's an economic crisis you don't expand, but rather batten down the hatches to protect what you have," he said. "I did see a fear of going global by U.S. companies, but that's dissipating in the past six months."

Some 67% of businesses claim internationalization is a key part of their growth strategy, but that only 20% of businesses have all their current communications adapted for local culture or language, per a recent study from Oban. Ecommerce sales worldwide should surpass $2.3 trillion in the next three years, per a Payvision white paper published in late 2014, Key Business Drivers and Opportunities in Cross-Border Ecommerce.

Oban takes companies global, teaching marketing executives how to plan and execute global paid-search campaigns, search engine optimization strategies, and social media. Aside from knowing the niche details of algorithms for U.S. social sites like Facebook and search engines like Google and Bing, the company focuses on Yandex, Baidu and other engines around the world. Oban supports brands in 80 markets in more than 30 countries.

Holbrook said U.S. companies have some of the best products in the world, but the brands have not given the international audience enough "love and attention to make it a significant line item for revenue."

Oban is working on a project with the BBC in Indonesia and Thailand, and another global project with Dell to better understand how different cultures respond to conversions and Web pages. Data from the Dell project reveals that the attitude toward Web pages in the U.S. and the U.K. is different. Brazil and Japan are similar, while France remains out there on its own.

Holbrook calls Dell's project "pioneering." The pages don't convert as well as they should, so they hope to "cultural cluster," but the research shows that consumers in these countries want much more local design and content, he said. Different cultures respond to Web pages, paid search advertisements, and social media campaigns. The Germans like a silver button on the checkout page. The Chinese like to scroll up and down on the page. Using the color red on a Web page in countries other than China has a negative influence on conversions.