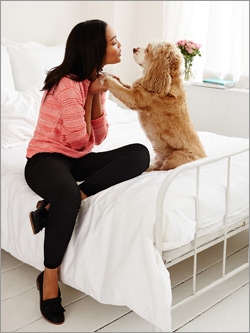 In a bid to get young women talking about its Spring fashion lineup, Gap’s Old Navy division has something new up its sleeve: A content marketing campaign combining native, video and display advertising, running across Tumblr and Yahoo.

The new effort is “for the younger end of our segment, the more Millennial audience,” says Michele Schuh, director of media at Old Navy. “We’re trying to re-engage her back with the brand and establish some third-party fashion credibility.”

While Old Navy’s primary campaign is also aimed at women 18 to 34, those ads — starring actress Julia Louis-Dreyfuss — run heavily on TV. That means that younger Millennials are less likely to view it. “We still support traditional TV, but we’re shifting dollars into online video. Our mix keeps changing,” she tells Marketing Daily.

The new effort focuses on Old Navy’s spring essentials, along with tips from style ambassadors Emily Current and Meritt Elliott. It uses the brand’s Tumblr page as its hub, as well as paid posts on Tumblr, and native ads across Yahoo properties. It also includes video and high-impact images in Yahoo Splash Ads, a first for a retailer. There is also pre-roll video across Yahoo networks, with style advice tips from Current and Elliott, mostly aimed at helping young women personalize their spring looks.

Schuh says the campaign is an example of how quickly digital advertising is evolving for fashion brands. “Probably a year ago, this would have simply been a campaign using digital banner ads. We wouldn’t have thought to push this out natively. And social has become much more important. A year ago, it was organic, and now we’re putting more media dollars behind it.”

And she expects more changes in the months ahead, with a greater focus on social commerce, making it easier for young women to buy the items they’re seeing within different channels.

Old Navy is Gap’s biggest brand, and its best-performing division. While its sales were flat last month, it posted same-store gains of 11% in its most recent quarter. And for the full fiscal year, Old Navy’s comparable-sales rose 5%, compared with a decline of 5% for the Gap flagship, and flat results from Banana Republic.