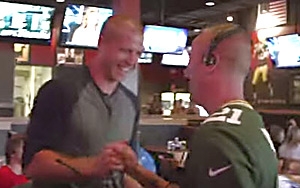 Buffalo Wild Wings (aka "B-Dubs") recently stunned the members of a local fantasy football league by having Green Bay Packers wide receiver Jordy Nelson show up at their annual draft meeting at one of the chain's restaurants in Wisconsin.

The gamers had been told that B-Dubs was going to film their draft party as part of a potential commercial. But as the draft started, the league's "commissioner" was presented with a headset, and heard Nelson on the other end, ready to offer his top picks advice. And as he listened, Nelson emerged, live and in person, from the back of the restaurant.

All of which, of course, was captured on video to feature on YouTube and other social media channels (screen shot shown).

That stunt was one in a series of "Alive Events" that the chain has been orchestrating this year to, in its words, "celebrate moments that matter" in its fans lives.

All four on YouTube so far involve sports stars — not a startling choice, given that sports enthusiasts are the chain's core customer base.