Zuckerberg Pledges To Give 99% Of Facebook Stock To Charity 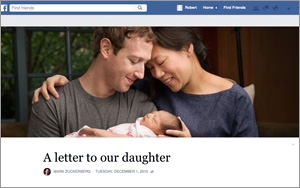 Mark Zuckerberg and wife Priscilla Chan have pledged to give away 99% of their Facebook stock, which is presently valued at about $45 billion. Facebook’s CEO announced the decision in an open letter to his new daughter, Max, published on Tuesday.

Critically, the decision does not mean that Zuckerberg plans to relinquish his position as head of Facebook anytime soon. “I will continue to serve as Facebook's CEO for many, many years to come,” he makes clear in his letter.

In the letter, Zuckerberg lays out an optimistic and egalitarian vision for the future of humanity, and stresses that technology -- and communication technology especially -- is already making the world a better place.

“We believe all lives have equal value,” Zuckerberg said, speaking for Chan and himself. “Promoting equality is about making sure everyone has access to these opportunities -- regardless of the nation, families or circumstances they are born into.”

As detailed in an accompanying Securities and Exchange Commission filing, Zuckerberg has created a foundation -- the Chan Zuckerberg Initiative, LLC -- which is controlled by him and his wife. For the next three years, Zuckerberg plans to sell or gift no more than $1 billion of Facebook stock each year -- and he plans to retain his majority voting position in the stock for the foreseeable future -- according to the filing.

Some of the pair’s goals -- like connecting the world so everyone has “access to every idea, person and opportunity” and “building stronger communities”  -- seem to align with Facebook’s existing capabilities and ambitions as a profit-seeking company.

But Zuckerberg and Chan have no plans to stop there. Additional goals include eliminating poverty and hunger, providing everyone with basic healthcare, building inclusive and welcoming communities, and nurturing peaceful and understanding relationships between people of all nations.

Signaling a political component to his future efforts, Zuckerberg notes: “We must participate in policy and advocacy to shape debates.”

As for the timing of their charitable giving and investments, Zuckerberg said he and his wife plan to give away their fortune “during our lives.”