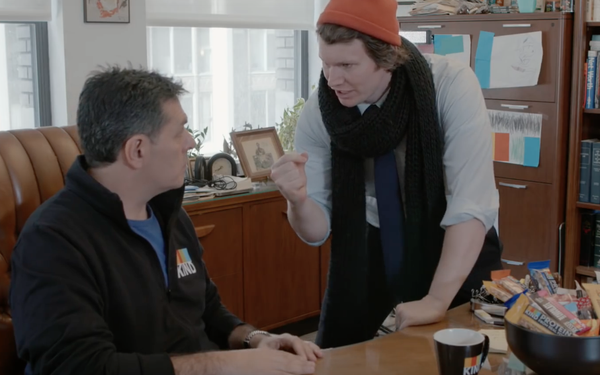 Kind bars says it’s giving away $6 million worth of samples to U.S. consumers (actually, coupons for free bars) instead of investing in a Super Bowl commercial. The cost of a 30-second Super Bowl ad reportedly exceeded $5 million this year.

Kind Snacks founder and CEO Daniel Lubetzky explains the offer in a humorously amateurish video (below). The effort is directed by a Kind accounting employee, who tries to get Lubetzky to emote (above) and suggests inserting a “CGI squirrel.”

Screen messaging at the end declares: “We don’t make great ads. We do make great bars.”

Viewers who click on the link at the video’s end are asked to provide their email addresses and agree to receive Kind’s newsletter and promotional offers in order to access a coupon for a free bar. In addition to the YouTube video, Kind is promoting the free-bar offer through email and social media.

Kind — which to date has not run a Super Bowl ad, but has employed sampling as a key strategy since its founding in 2004 — says it believes that having people try its bars is a more efficient way to win new customers and build sales than using an expensive 30-second ad to try to people to try the bars.

Kind’s indirect tie-in with the Super Bowl is an extension of a free-bar couponing push around its launch of a line of protein bars.

Earlier this month, the brand offered the first 10,000 online respondents a free coupon for a Kind Protein bar, plus a free bar from a competitive brand of the consumer’s choice (Quest, Clif, ThinkThin or Power Crunch).

To promote that offer, actress/producer Anna Faris appeared in a video in which she read real, harsh (often disgusting) social comments about competitive brands’ protein bars.

The 3,000 coupons were snapped up within three hours of the video’s posting on January 17, according to a Kind representative.

The video itself, supported by social, has been viewed more than a million times on YouTube.