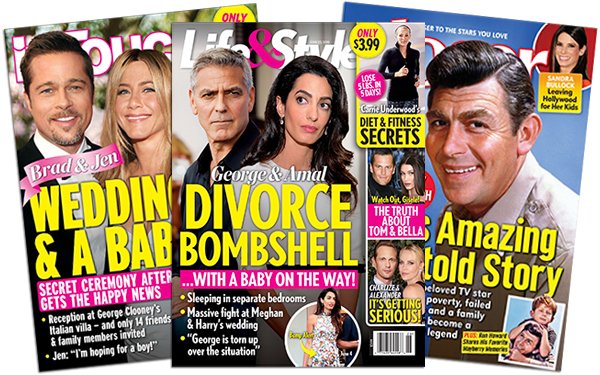 American Media Inc. has consolidating its ownership of nearly the entire gossip and celebrity print market, acquiring the 13 celebrity and teen titles at Bauer Media USA. (People magazine, which Meredith added to its portfolio as part of its acquisition of Time Inc. earlier this year, remains the top celebrity title on newsstands.)

The titles in the Bauer deal include In Touch, Life & Style and Closer, which will add to AMI’s Us Weekly, OK! and Star gossip brands. J-14 and GirlsWorld were also part of the acquisition.

The transaction is expected to close around July 1.

The recently acquired titles will become part of the AMI Entertainment Group, which will reach 38 million readers and deliver the youngest median age in the category, according to the company.

AMI will now sell more than 1 million celebrity magazines a week on newsstands, according to a report from the New York Post.

"Despite newsstand sales declining 20% annually, both Bauer and AMI have continued to invest in the marketplace, and we believe there is still a terrific opportunity to grow newsstand revenue,” stated AMI CEO David J. Pecker.

AMI also acquired Us Weekly and Men's Journal from Wenner Media in 2017.

Bauer Media USA says it decided to focus on its women's service brands, which include Woman's World and First for Women, its top two newsstand sellers. The publisher will continue to push into this market, the company stated.

Pecker has been at the center of controversy this year, specifically for the National Enquirer's “catch and kill” of Karen McDougal’s story about her affair with President Donald Trump, a longtime friend of Pecker’s. The company is said to have paid $150,000 for the story, which was not published.