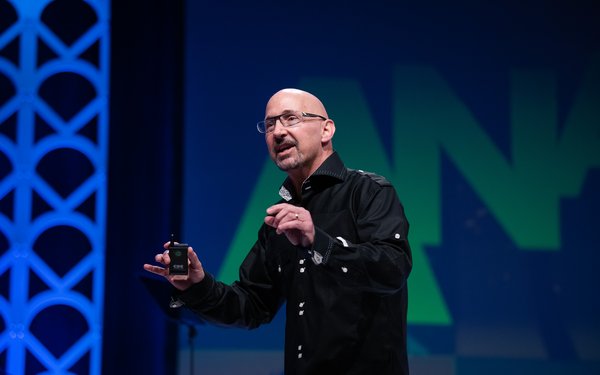 ORLANDO, Fla. — While consumers are very risk-averse, marketers must discover what level of risk they and their companies are comfortable with.

That’s according to Progressive CMO Jeff Charney, who spoke to an at-capacity audience of more than 3,000 attendees at the Association of National Advertisers' annual Masters of Marketing conference.

“One size does not fit all,” he says. “Some of you are conservative, some of you may be moderate, some are even more progressive than me.”

Progressive recently jumped over Allstate and became the third largest insurance company in market share, according to the National Association of Insurance Commissioners, so the company must be doing something right. Charney uses the Goldilocks analogy.

“The best marketers go close to the edge, but they do not go over,” he says. “Overthought is too cold, no thought is too hot. If you are appropriately thoughtful, you are just right.”

Charney says he won’t rest until Progressive is the number-one brand in the insurance category. But risks don’t have to be all or nothing propositions.

“Let’s be real. We are marketers --it’s not a life or death proposition,” he says.

Charney told the story of how he learned from an early experience. After his high school crush turned him down for a date, he decided to run against her for student council. He won.

Reading the definition of risk makes you want to take less risk, he says. “Don’t pay attention to that, form your own definition of risk,” he adds. “Across the industry, marketers are not taking risk. It pains me. We have gone into creative hibernation.”

Flo is the most-known spokesperson of any brand, Charney asserts. He credits the control the company has as a result of forming an in-house creative and media buying team as one reason the brand has been successful.

“You have to have great characters in order to make great content and place it in the right context,” he says.

He encouraged other CMOs to consider taking at least some of their marketing in-house.

“You have to have partners who know what they're good at,” he says. “We still use external agencies to supplement our internal agency."

During a one-on-one interview after his presentation, Charney talked about the longevity of the brand’s fictional spokeswoman, the ageless Flo, who has been around for 10 years.

Flo and her cast of characters are like a TV situation comedy and there’s no shortage of scenarios in which they can appear, he says.

In “Real Actors,” which debuted in July, the brand poked gentle fun at the long-running Chevrolet campaign that proclaims it features “Real people -- not actors.” Turning the concept on its end, the Progressive ad opens with the super “Real actors. Not people.”

“We were laughing with them, not at them,” he says. “We are on the air a lot, too, and people have fun with us. The social reaction has been incredible. It hit a nerve. It was fun, it was good-natured, nobody gets upset about it. Both brands have mutual respect for one another and that’s what makes it more fun. If you’re confident in your brand, you’re confident in what you put out there."

Research continues to shows Flo is not wearing on people, he says. On the contrary, the number of people who dislike her is declining.

“She doesn’t age because we put her in situations where she feels relevant,” he says. “We really make sure that she’s in the right context, with the right content.”

While she’s in many TV spots, the company has been careful not to overexpose her in other media.

“What never ages is authenticity,” he says. “If you are honest and authentic and real with people, it doesn’t matter if you do age, or if you gain five pounds or you dye your hair a different color. If you are authentic, everyone is going to relate to you.”

For a second year in a row, the Flo Halloween costume is very popular, which is also a reflection of the character's likability, which seems to transcend demographics, he says.

“Kids like her, older people like her, women like her, some guys crush on her,” he says. “You can’t love a logo, no matter how cool it is. You can’t identify with a logo. You can identify with a person. When you create icons and you see them in the wild, it’s a beautiful thing.”