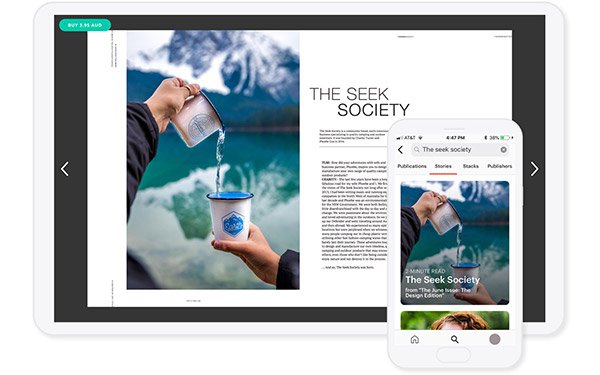 Over the past year, Apple News has quietly positioned itself as a front-runner among news platforms. It bought up Texture and tapped New York’s Lauren Kern as its first editor-in-chief. The platform has also gained recognition for its brand safety. Carefully curated by an editorial team, fake news and misinformation is less likely to show up.

One downside, large publishers are reporting that while their audience has increased by 400% in some cases on the app, Apple News doesn’t sell enough advertising to send much revenue their way.In particular, Slate has been vocal about this, publishing a report earlier this fall.

Now, digital discovery and publishing platform Issuu is launching a channel on Apple News to help connect its publishing clients with the app’s audience.

Ramona Atkin, editor-in-chief, Lucy’s Magazine, an Issuu user, told Publishing Insider: “Getting our content featured on Issuu’s Apple News channel is a great way for us to reach more people and gain the visibility we’re looking for. Apple News has become today's digital newsstand and is where people discover new and interesting content.”

Drawing from its 4 million content creators and brands, Issuu uses its Stories Creator Engine to turn PDFs of print magazines into usable layouts that can be posted across social media. It also allows a publisher’s content to be turned into an Apple News story and pushed directly to the platform.

Issuu then tracks metrics for all impressions and reads, giving publishers access to how their content is performing.

“We’re managing the content across the Apple News channel so it’s in line with Apple’s overall curated approach to content,” Joe Hyrkin, Issuu CEO, told Publishing Insider. “We’re doing it in a way that introduces a whole new set of content that wouldn’t otherwise be available.”

Some of Issuu’s clients, like Lucy’s Magazine and Sweet Paul, expect to see a jump in revenue through audience expansion, subscriptions and hopefully advertising.

“I see every new reader of the preview of Sweet Paul or each new person who reads a mobile story from us as a potential new subscriber. I have the potential to sell an issue or a subscription directly on Issuu,” said Paul Vitale, marketing-business development director. “Being featured on Issuu’s Apple News channel gives me even greater reach without having to invest any more time.”

Hyrkin explained that introducing titles like Lucy’s Magazine and others through Apple News allows publications with big followings across social media and other platforms to be discovered by new audiences. Sweet Paul, for example, sells digital issues of its magazine through the Issuu system — and will reach a new audience through the Apple News channel. (its print version is available in Anthropologie.)

“Part of the appeal of Apple News is value by association. Everyone who is a part of Apple News is known for being quality curated with meaningful information that has a following,” Hyrkin said. “That reputation facilitates a set of business opportunities for [small- and medium-sized] publishers.”