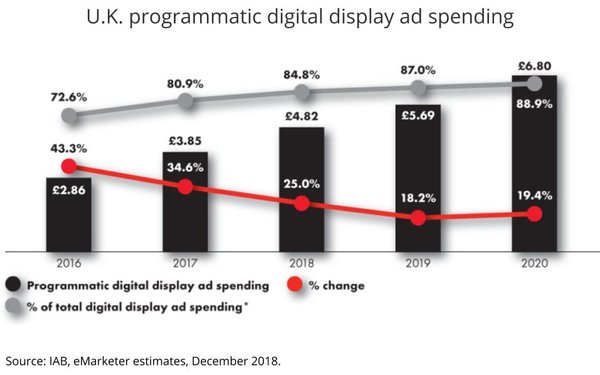 Marketers in major Western European nations are shifting their programmatic media-buying in-house, at least partially, according to an in-depth series of analyses released today by the Interactive Advertising Bureau (IAB).

The reports, which cover the U.K., Germany, France, Spain and Italy, estimate that an average of 86% of brands buying media programmatically in those markets have moved it completely or partially in-house.

One factor driving the shift, the IAB report notes, is compliance with the EU’s GDPR (General Data Protection Regulation) rules, which established liabilities for companies that are improperly utilizing consumer data.

Here are the top-line percentages for each country’s census of programmatic in-house shifts:

The report’s quantitative results are based on the Ipsos MORI Omnibus Survey fielded in March 2019: 950 European-based brand representatives participated in the survey. The respondents represent media decision-makers across all job titles and 16 major ad categories. All are qualified as involved in making digital, television, mobile, radio, and/or print media decisions. Pre-Meditated Media, LLC authored the study by integrating insights from the Ipsos MORI Omnibus Survey, executive interviews, and industry research.

The complete report can be accessed here.