Scenario Project Finds The Future Isn't What It Used To Be, The Car May Be TV's Next Big Daypart 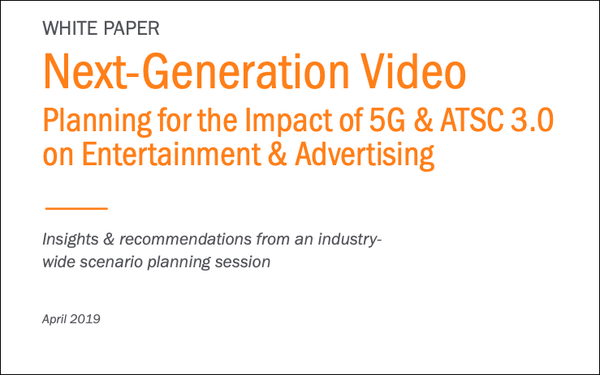 In a rare cross-industry exercise to plan for how some burgeoning new technologies -- 5G and ATSC 3.0 -- might impact the advertising and media industry, a consortium backed by Fox today will release a white paper summing up a variety of scenarios to help advertisers, agencies and media suppliers prepare for the future.

The project -- an in-depth, one-day scenario planning session managed by media industry researcher Magid -- convened C-level executives from Madison Avenue, Wall Street, technology and media industry companies to hash out the near- and long-term implications of technologies that are expected to accelerate both the volume and speed with which data is transferred between screens and other devices, impacting how consumers interact with media and brands.

“We spend a lot of time in this business reiterating how the rate of change keeps speeding up, but we don’t normally step back and plan for it,” Mike Bloxham, senior vice president of global media and entertainment at Magid explained in an early brief of the project and its findings to MediaPost.

He said the session, which took place in late December, and the white paper being released today were not intended to be explicit answers so much as a tool that people in the industry can use to benchmark and adjust how change manifests over time.

That said, he noted that a recurring theme was the impact that the greater ubiquity of data would have on all stakeholders, especially consumers, and the need for the industry to get out in front of the issues -- both consequences and opportunities -- that emerge from that.

“The consequence of so much more data becoming available at an ever increasing pace will make what we are looking at now seem pretty neanderthal,” he said, adding that there was a consensus among the scenario planners that it would impact consumer privacy, policy and regulation in ways we are just beginning to understand.

A variety of scenarios can be reviewed in the white paper here, but Bloxham emphasized that the goal isn’t necessarily to recalibrate strategic plans based on it, so much as to begin thinking about how different scenario outcomes could impact future decisions and development.

“I look at it as a tool someone will keep on the corner of their desk and refer back to over time as things change so they can reassess where things stand and how it impacts them,” added Debbie Reichig, senior vice president-media research and insights at 20th TV, who began working on the project as part of an initiative that began while she served on the Futures Committee of the Nielsen-funded Council for Research Excellence (CRE). But when Nielsen pulled financial support from the CRE in 2017, Reichig turned to her colleague Audrey Steele, executive vice president-sales research, insights and strategy at Fox to fund it.

In a statement, Steele described it as a “creative brainstorming session” that envisions the “potential impact on the future of video.”

Magid’s Bloxham echoed that much of the focus of the project has been on how 5G and ATSC 3.0 will impact video -- especially TV -- but he noted that some of the scenarios call for rampant disruption of conventional ways of thinking about the medium.

“Like the notion of what are we going to do when 20% of all video advertising is served in the automobile,” he said, adding that for all the industry’s hemming and hawing on the impact of things like “time-shifting,” the implications for these new technologies to transform virtually any object and place into a video screen that can serve an advertising message is transformative.

Bloxham said the scenario planning process ideally would be replicated over time to benchmark and reassess new scenarios as technological and cultural changes manifest, but he said it’s unlikely that the “unintended consequences” would be predictable as linear outcomes.

For example, he said it is most likely that the impact of 5G and ATSC 3.0 would not necessarily be singular, but cumulative as the two technologies rollout, scale and impact the marketplace in disparate ways.

advertising, automotive, data management, digital, media buying, media planning, research, technology, tv, video
1 comment about "Scenario Project Finds The Future Isn't What It Used To Be, The Car May Be TV's Next Big Daypart".
Check to receive email when comments are posted.
Next story loading