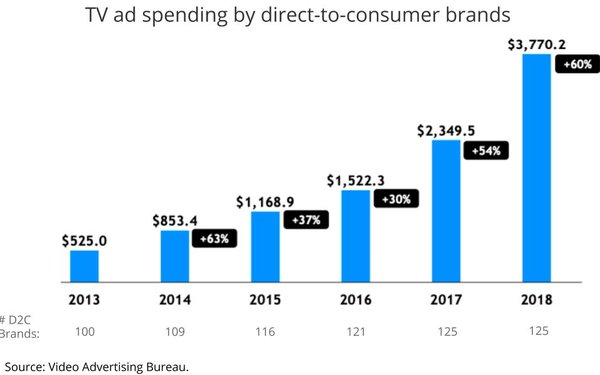 The VAB says this comes from tracking -- since 2014 -- 265 data-focused, performance-driven, digital-native D2C brands over 85 categories. The VAB defines D2C brands as companies selling their product directly to customers without third-party retailers, wholesalers or other parties.

To sell the message of the strength of TV, two major on-air D2C companies, John Foley, founder-CEO, Peloton and Jerry Hum, cofounder-CEO, Touch of Modern, are appearing in the series of 15- and 30-second ads.

The campaign is produced by Viacom Velocity, and will be seen on over 50 TV networks and local TV markets through major cable, satellite and telco video distributors for 15 weeks.

Key for many of these D2C brands is proving direct links to strong “business outcomes” -- something many received from their digital media buys.

For example, Touch of Modern, an online retail app targeting consumers products for men, grew sales revenue 33% in 2018 over the year before due to increasing its TV campaign spending.

The VAB says other business outcomes for many of these business witnessed higher website unique visitors as well as higher search queries, online video views, and other metrics due to higher TV ad spending.