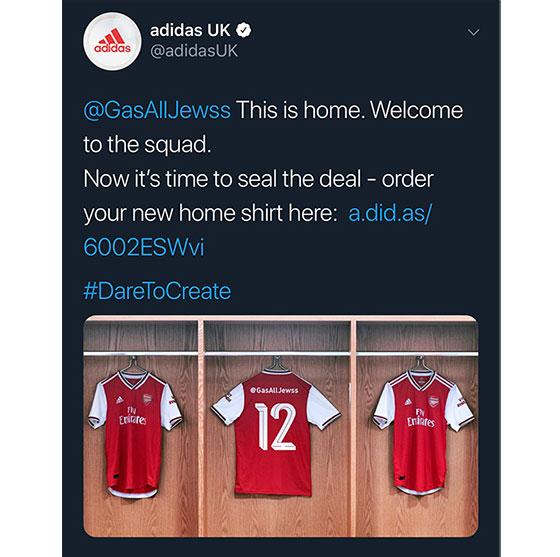 In a mistake that borders on negligence, Adidas just handed the reins of its Twitter account to a bunch of bigots.

The sportswear giant didn’t do so intentionally. Yet, the campaign -- intended to promote soccer apparel in the United Kingdom -- was too easily turned into a platform for anti-Semites and racists to spread their messages of hate.

Within hours, malicious users were changing their handles to the most offensive messages imaginable before tweeting #DareToCreate.

This resulted in more than 800,000 followers of Adidas U.K.’s Twitter account receiving a slew of highly offensive messages from handles including“@InnocentHitler” and “@GasAllJewss.”

The offensive tweets have been deleted, and many offenders' accounts were suspended by Twitter.

In a statement, Adidas said it has suspended the campaign by turning off the functionality, has "taken action on a number of accounts for violating our policies," and is investigating the matter.

But the damage has already been done. Even more troubling: Adidas should have known better, and put measures in place in advance to police the content going out to nearly 1 million consumers.

Similar social-media campaigns have been commandeered by bad actors in the past. For instance, in 2014, the New England Patriots learned to be more careful with social media accounts after some racist trolls exploited a Twitter-based campaign.

The Adidas campaign “provides yet another valuable reminder to brands on why you should never let the internet customize anything,” Andrew Frank, founder-managing partner of U.K. PR agency Frank, tweeted on Tuesday.