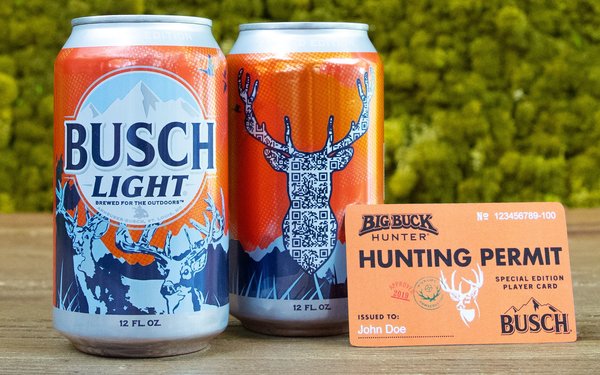 One example: As a new Busch Beer promotion points out, 60% of wildlife conservation efforts are funded from proceeds from hunting licenses.

But there’s a downside to this connection between conservation and hunting. Because fewer and fewer people hunt anymore,  their absence actually dries up the funding for conservation efforts. Experts fear what will happen as the slide continues. That’s an odd problem to have.

A new promotion from Busch hopes to fix things by encouraging its drinkers to play the Big Buck Hunter video game -- found in nearly 1,600 bars around the country -- and purchase a $5 Big Buck Hunter Permit online, with all the proceeds going to the National Forest Foundation.

Players can take that card and swipe it on the video machine,  possibly leading to winning a Big Buck Hunter video game of their own.

(We should make clear: A Big Buck Hunter Permit is not a license to kill.)

The beer brand will also create special on-pack promotions for its “Busch x Big Buck Hunter” partnership that will trigger a smartphone-powered augmented reality game that leads to winning the home video game. Every time Busch fans play and post their Big Buck Hunter score to social media, Busch will kick in $1 to the NFF.

It will double that contribution on National Hunting and Fishing Day, Sept. 28.

Busch will also highlight the campaign at the NASCAR Monster Energy Cup Series Bojangles 500 race on Sept. 1, using a Busch x Big Buck Hunter paint scheme on one of the cars, with another way for viewers to enter the Big Buck Hunter home version game.

Teaming up with Big Buck Hunter might send a bit of a mixed message to some. Quipped a headline on the Craft Brewing Business website, “Busch Beer And A Game Based Around Killing Animals Are Teaming Up To Protect Nature.” But even that story made it plain the promotion was, in the end, a laudable, means-to-an-end  idea.

"With reduced funding for land management activities that improve wildlife habitat, partnerships with companies that are committed to protecting America's great outdoors are increasingly important,” states the NFF's Marcus Selig. The organization says it will use most of the money to “preserving and restoring tens of thousands of acres”  of natural wildlife habitats via its tree planting efforts.

“Busch has a long history of supporting outdoor conservation, and we’re proud to continue our relationship with the National Forest Foundation to help to protect America’s outdoors for generations to come.” says Daniel Blake, senior director of marketing at Anheuser-Busch, in a statement.

The U.S. Fish and Wildlife Service surveys the situation every five years. The 2016 tally reported that the number of people who hunt dropped from 14.1 million in 1991 to 11.5 million in 2016.

But the same survey showed 86 million watched wildlife, about 34% of the plus-16 population. Wildlife watching has increased 20% since 2011. There’s no license required for that.