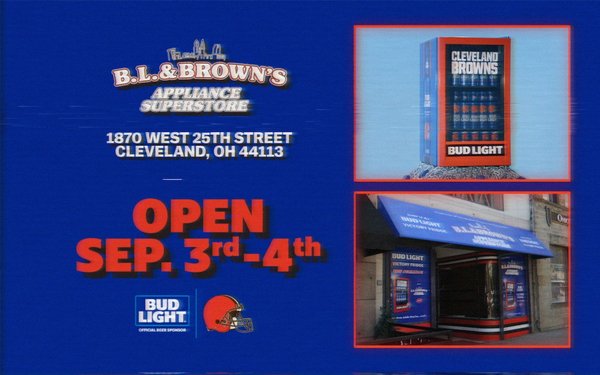 Last season when the team was seemingly officially called The Hapless Cleveland Browns, Bud Light Victory Fridges were installed at bars around Cleveland and triggered to unlock to provide fans with a celebratory beverage the moment the Browns finally won a game.

They finally won last year, in the third game of the season.

This season, with star quarterback Baker Mayfield in charge, there’s much more hope of better outcomes.

So Bud Light announced it’s opening  B.L. & Brown’s Appliance Superstore, selling only Bud Light refrigerators of varying sizes, most priced between $199.99-299.99 -- and a few really big ones that will go for $599.99. In total, there are about 150 refrigerators for sale, and only at that store.

These won’t last long. B.L & Brown’s is a pop-up store that will only be open Sept 3 and 4 inside a storefront in a Cleveland neighborhood dotted with some solid craft bars and good old beer joints. (It’s really kind of a small superstore, just 2,000 square feet. Previously, it housed a beauty salon.)

“Last year, when our Victory Fridges unlocked in bars across Cleveland, it created a local pandemonium in the best way possible,” said Andy Goeler, Bud Light vice president of marketing, in a statement. “This year the lock and chain come separately because we expect it won’t take too long to get that first win.”

The brand  partnered with WWE Superstar The Miz, a former Clevelander and big Browns fan who last year had his own live video of his fridge-opening when the team finally won on Sept 20.  His video about the pop-up shop will begin airing on local Cleveland stations starting Friday.

After finally tasting victory last season, Cleveland finished 7-8-1, a semi-respectable or even disappointing record for most football teams but a giant leap for the Browns.

In fact, they've been a remarkably dependable  losing organization since the team returned to the city in 1999 after the previous owner moved the original Browns to Baltimore after the 1995 season. Since 1999, the Browns have had only two winning seasons.

Though Anheuser-Busch can still claim Bud Light is in first place as the best-selling beer in the U.S., it has been going through a rough patch of its own along with many established brands. The IRI research firm says Bud Light sales are down 5.7% this year as more beer drinkers switch to craft beers.