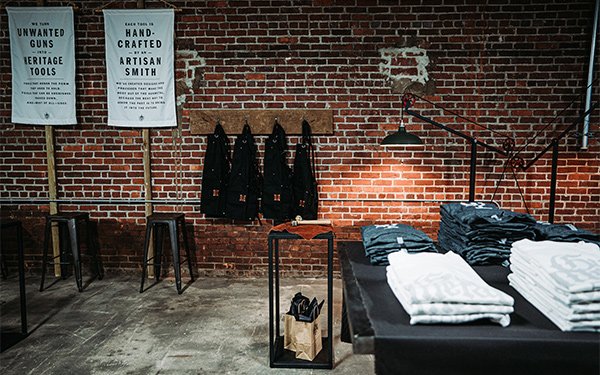 EP+Co is tackling the divisive gun debate in its home state of South Carolina. This is the first time the agency has launched its own advocacy campaign.

“I knew the biggest question when we launched this would be, ‘why?’ Why would an ad agency wade into something as hotly debated as guns?” said Con Williamson, President and Chief Creative Officer at EP+Co. “Well for us, the question should always be, ‘why not?’ We’re not coming to take peoples’ guns. Unless they want us to. What we’re trying to do is help unthink a problem and turn it into something that serves a purpose."

The agency's "Gun Metal Forge" program lets owners donate their unwanted firearms to become transformed into unique heritage tools, such as hammers, knives or wooden mallets. The agency ensures each tool created is hand-crafted by an artisan using designs and processes that make the most out of the gunmetal, while honoring the original form and heritage of the firearm.

The concept for this intuitive is a result of the agency’s internal “Unthink Everything Challenge” held earlier this year. This competition challenges employees from every department to collaborate across disciplines to create their own brand and "unthink an idea" to get people talking. All proposals were pitched to a team of judges, with Gun Metal Forge winning the opportunity to be developed into tangible products by the agency.

Tools are available at the Gun Metal Forge website or via a limited-time pop-up store, opening exclusively in EP+Co’s headquarters city of Greenville, SC. Open until Dec. 15, the store offers a behind-the-scenes look at the making of the tools and allows customers order products.

"We’re in the world of bringing ideas to life, and this one combines our passion for tinkering, making and prototyping, with a real opportunity to help solve a problem, which is pretty awesome," says Williamson.

Although anything related to the Second Amendment tends to be polarizing, Williamson points out this project does "not take sides or politically lean one way or another," he explains.

"Whatever your stance is on the issue of guns, I think you would agree that unwanted firearms are a dangerous problem. So there was never any hesitancy when we knew we had the opportunity to take that problem and help turn it into something useful, because that’s at the heart of what we’re trying to do."