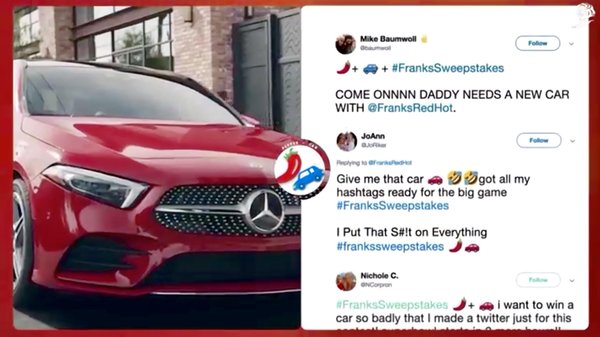 You can register to read more brand case studies like this one by clicking this.

It tasked its agency, McCormick, with developing a Super Bowl program with no TV ad based on its tagline, "I Put That S#!t On Everything." It invited people to use emojis on Twitter to pair the existing chili emoji (very close to what is on the label) with an emoji representing all 57 Super Bowl advertising brands -- putting that s#!t on everything -- with #FranksSweepstakes.

Prizes included everything from 32 tubes of Colgate toothpaste to a trip to (Avocados From) Mexico.

Brands got in on the fun as Frank's interacted with 45 of them throughout the game, tweeting out over 60 pieces of custom content and was immediately flooded with contest entries.

Agency reps say the new "heart to remind" unit was successful at driving sweepstakes entries, especially given the low investment level. The functionality of the unit helped drive over 40% of the entries and auto-populated notifications to those users who “hearted” a tweet to remind them to enter the contest the night of Super Bowl. This resulted in Frank’s winning Twitter’s Interception Award, which is given to the brand without a TV spot that drove the highest percentage of brand conversation.

If they had to do it over, McCormick says it would:

Among lessons learned, McCormick says that building awareness at least two weeks leading up to the Super Bowl is key to inform people that the contest will be taking place, especially given the amount of Twitter activations on Super Bowl Sunday. And it advises, "Be clear and concise with the sweepstakes that you are promoting and the messaging in the video. Have a mock tweet that shows consumers how to enter the contest to avoid confusion on how to participate."