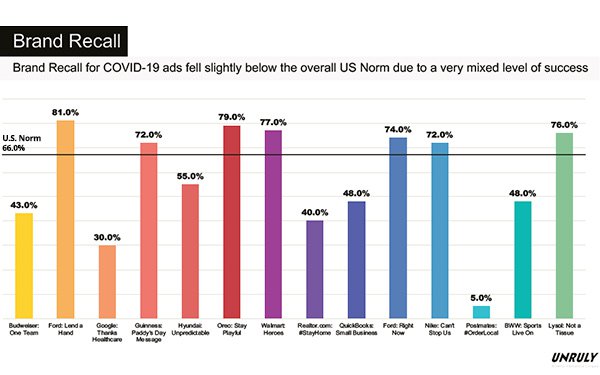 Brand recall for COVID-19 related ads fell slightly below Unruly’s overall U.S. norm due to a very mixed level of success, but simplistic messaging encouraging those who viewed the ads to engage drove the highest brand recall.

Budweiser: One Team topped the list for brand favorability, but Ford: Lend a Hand took the number one spot at 81% for brand recall.

Unruly, a Tremor International company, tested about 14 ads during the weeks of April 5 and April 13. About 500 panelists viewed and were asked to answer a series of questions rated to viewability and emotions. Some ran on digital or both, while the others ran on television. Responses to the COVID-19 message ads were analyzed similar to the way Unruly grades Super Bowl or holiday ads. Scores were looked at in aggregate to understand the quality and the way people react during the pandemic.

Purchase intent is heavily influenced by accessibility, ease of purchase channels and demand. Brand recall for Lysol came in at 76%, but when it came to driving purchase intent, the message in its Not a Tissue ad topped the list at 63% through relevance and compelling health stats. That type of information drove an above average purchase intent score for all consumer product goods.

There were lessons to be learned. A muddied message with too much information shoved quickly at viewers, for example, hurt the Postmates: #OrderLocal ad, which came in at 5% for brand recall, but 40.9% for brand favorability, according to Terence Scroope, Unruly VP of Insights and Solutions.

“Too much information too quickly in terms of the way it was cut and put together,” he said. “It’s too much to process in a short period of time.”

The Google: Thanks Healthcare did well in many categories, but brand recall at 30% wasn’t one of them. The brand came in second to last at 30% on viewer recall.

Most COVID-19 related ads succeeded in driving higher levels of interest in brand or related causes, but Google, playing on its strength of being a trusted source for information, ranked highest in this category at 57%. Oreo followed at 46.3% and Walmart at 45.9%.

Google also drove the highest intense emotional reaction from consumers at 59.2%. Oreo followed at 52.7% and Budweiser at 47.8%.

Lysol did the best job of keeping consumers informed. Some 49% of U.S. consumers said being “informed” was their primary desire from advertisements during COVID-19. Quickbooks followed with a score of 23% when it came to information consumers. Hyundai ranked third at 22%.

One-third of U.S. consumers identified inspiration as a key emotion they desired from ads at this time. Here once again, Google ranked at the top with 31.2%. In its typical style, Nike tied its message to uplifting copy that drove one of the highest inspiration scores 26%. Budweiser followed at 23.4%.

Some 37% of people were seeking ads that would make them happy. Oreo played that part, scoring the top spot at 37.1% with upbeat music that drove very high happiness scores and generated strong brand key performance indicators.

Warmth was a popular advertising emotion in the consumer survey for more than 35% of U.S. consumers, with Google taking the top spot at 27.4%. Relatable imagery and crafted voiceover elevated levels of reported warmth for a quarter of respondent, but Realtor.com came in second with 25.6% for its #StayHome message.