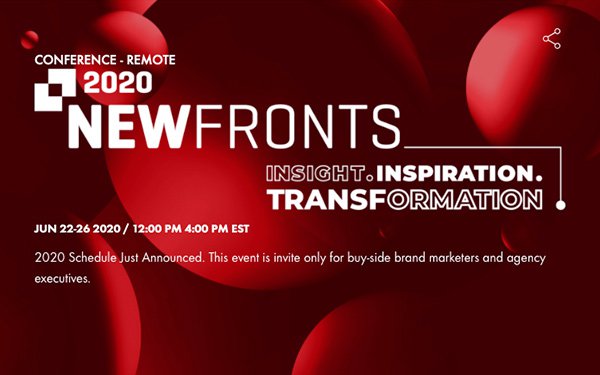 The Interactive Advertising Bureau will offer its NewFronts as a virtual video upfront series of presentations for the week of June 22-June 26, after cancelling its live events set to run in April.

The virtual video presentations will run from 12 p.m. through 4 p.m. ET every day, and will cover “streaming video, lifestyle, news and audio, eSports, and gaming.”

Presenters so far include:

NewFront presentations from a number of digital first-media and legacy TV companies had originally been scheduled for April 27 through May 6.

In early March, the IAB cancelled the event due to COVID-19. NewFront presentations traditionally run right before the major TV network groups' upfront event held in the second week in May.

Major TV network groups also planned around that time to have their upfront events presented virtually on video streaming platforms.

TV upfront presentations -- previews of new programming for the upcoming season -- traditionally start the upfront buying/selling period where big brand marketers commit to spend around 70% of their yearly TV media budgets for the September-August TV season.

Typically, around $20 billion is placed in a June-August period for the upcoming season.

The original NewFronts were started over a decade ago in 2008 and were called the Digital Content NewFront, hosted by media agency Digitas.

In 2013, the IAB took over organizing a new version of the event with six founding media partners -- Digitas, AOL, Google, Hulu, Microsoft Advertising and Yahoo -- hosting events that year.