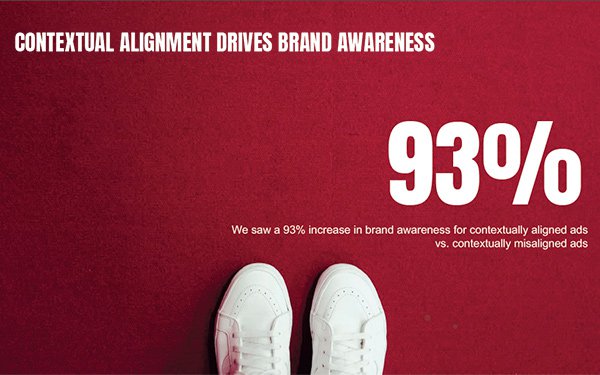 There are serious consequences for success or failure of misaligned video campaigns versus contextually aligned campaigns, according to a study released Wednesday.

An analysis of the findings from Channel Factory, a global technology and data platform supporting brands on YouTube, which partnered with the University of Southern California’s Applied Consumer Psychology department defines “contextually aligned” as an M&M advertisement serving up on an M&M unboxing video, and “contextually misaligned” defined as a cereal ad serving up on a car video.

The survey analyzes responses from 354 participants to better understand brand awareness lift and attributes such as the ability to share, engage, and entertain.

Across all industries, people are more likely to consider a brand and share an ad when the ad is presented with aligned content compared to misaligned ads. Contextually aligned ads were 93% more memorable than misaligned ads, the study finds.

Participants were shown a series of pre-roll ads followed by video content that was contextually aligned or misaligned with the brand. After each ad-video pairing, a series of questions were asked about brand's relevant attributes and outcomes.

The study examined the variance in the effectiveness of contextual alignment by industry category. When it comes to the consumer product goods category, 9.7% showed a lift in entertainment.

Within the auto industry, participants were more engaged by 3.13%, viewed the ad as more believable by 1.64%, and showed an improved intent to purchase by 1.81% when ads and content were aligned.

Notably, for the auto industry, there were no significant differences between aligned and misaligned ads when analyzing all brand lift constructs and advertising attributes.

All industries experienced a 2.5% improvement for ad attributes and brand lift outcomes when ads and content were contextually aligned, compared to when they were misaligned.

Across all industries, people were more likely to consider a brand and share an ad when the ad was presented with aligned content, compared to misaligned ads.