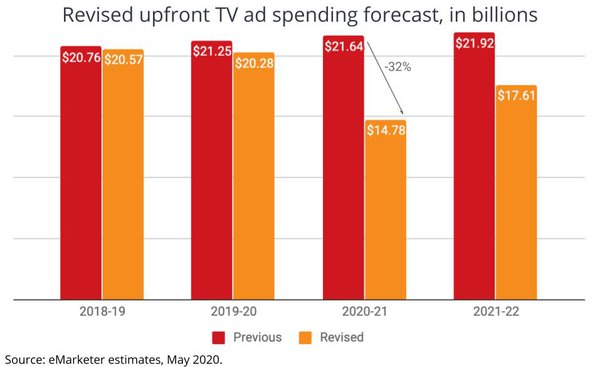 At a time when many on both the supply and demand side are trying to get a handle on the 2020-21 network upfront advertising marketplace, or whether there will even be one, eMarketer has weighed in with a revised forecast projecting the volume of ad spending will decline by a third vs. its previous estimates.

Its new estimates project the 2020-21 upfront marketplace for broadcast and cable TV networks will total $14.78 billion, down from its previous estimate last year of $21.64 billion.

eMarketer also revised its 2019-20 upfront estimate down slightly, and its 2021-22 upfront forecast down significantly.

It cited a variety of factors, especially the "broader economic difficulties," as well as "content production stoppages and uncertainty around when live sports will return make it unclear what programs TV advertisements might appear this fall."

The forecast comes as the ad industry has called for permanently shifting the overall cycle of the network upfront marketplace from its traditional broadcast year buys (fourth quarter through third quarter) to delayed calendar year marketplace covering the first quarter through fourth quarter of each year, mainly to align the commitments to better timing for understanding what marketer's budgets and needs actually are.