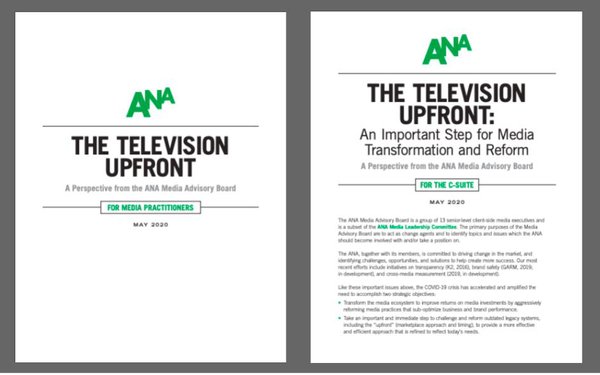 A day after calling for “sweeping changes” to transform the ad industry’s inclusiveness and diversity, the Association of National Advertisers this morning issued another call for “sweeping changes” in the “media ecosystem,” and specifically called on the television advertising industry to move the annual upfront negotiating season from a spring/early summer marketplace purchasing a fourth quarter through third quarter broadcast year to a fall/winter marketplace purchasing a conventional calendar year.

Other than the shift in the timing of negotiations and the quarters represented in upfront deals, the ANA implied that nothing else should change about the upfront process.

“This should not change the all-year negotiating process that currently exists between buyers and sellers. Nor should it change the fundamentals of marketplace transactions, with each company making its own independent determination of when and what advertising time it will purchase,” the ANA said in its statement, adding: “Rather, it should be part of a process that is grounded in flexibility and includes, as a choice, a better-timed upfront.”

The ANA also released two white papers with the call to educate both media buyers and C-level marketers about the process and why it's important to change the market timing now.

“The calendar year upfront is a modification of the legacy broadcast year upfront where the same general principles apply – advertising bought and sold in advance,” notes one of the papers, adding: "However, the time frame is shifted to purchase inventory in a specific calendar year upfront with the typical negotiation window occurring in the fall or early winter timeframe.”

The call creates further uncertainty for an upfront advertising season that already has been transformed in terms of its presentations -- which moved from physical events to virtual ones -- and to its timing, which many buyers had already been predicting would shift to the fall or winter.

But in recent weeks, network sales organizations have indicated they are ready to do business as usual, and some have implied they already have negotiations underway. Such posturing is typical for the sell-side, which tries to create momentum for negotiations in order to stampede the market and create perceived demand for its upfront inventory.

While the ANA call did not outline any other specific sweeping changes, it alluded to them.

“Timing is only one of the choices marketers make," ANA Chairman and P&G Chief Brand Officer Marc Pritchard said in a statement, adding: "We need far greater marketplace transparency throughout the media system to enable choices to drive out media waste, improve effectiveness, and dramatically elevate the consumer experience. Only then can we achieve true media transformation and reform.”

He cited several "embryonic initiatives that can revolutionize the industry," including: