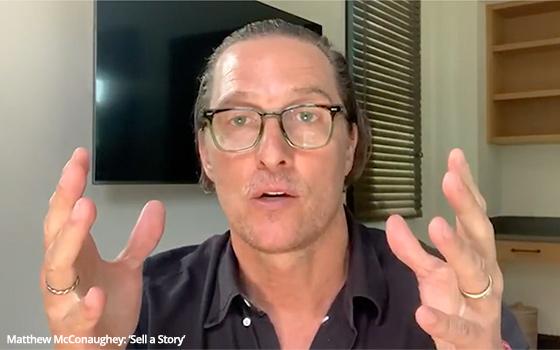 Actor and “minister of culture” Matthew McConaughey is spending time during the COVID-19 pandemic offering words of wisdom on how to master the art of story-telling as part the “Stan Talks” series, named after advertising legend Stan Richards.

McConaughey delivers his lesson with witticisms along with some surprisingly solid advice.

“From an eight-hour mini-series to an eight-second ad, we are all just telling stories,” he says. His concise summary states in order to create a product or need, one must understand the reasoning for its purpose and develop a compelling story to connect with the audience. “You must believe in it,” he states. “You are going to sell it a lot better and have a lot more fun selling it.”

The Oscar-winning actor  goes on to discuss mastering the product by understanding its brand positioning in the marketplace. “If you don’t believe in it, the consumer will not believe in it," he cautions. “The only way to get to the royal ‘we’ is to get through the objective ‘I.’”

Professor McConaughey’s next tip analyzes the audience: “Who are you selling to?” He mentions he sells his movies differently to his wife or studio head than to his kids. A 35- and 85-year-old need different pitches, even though it is the same product, he states.

He recommends people “deconstruct” their ideas into pieces. “Maybe it doesn’t even need words, like a symbol,” he notes, before pointing out solid brand identities formed by logos include Nike’s Swoosh, Grateful Dead’s dancing bears and Dallas Cowboys’ Star. “To get to the head, you have to go through the heart.”

He concludes his session with some quick bits of advice, including knowing what you know and don’t know. And when you do not, “ask for help or directions,” he recommends. His final advice states there is more than “one way to be right” and “amendments are not always improvements.”

"Stan Talks" is a part of the Stan Richards School of Advertising & Public Relations, housed within the Moody College of Communication at the University of Texas at Austin. Additional video topics include trends related to big data analytics, global branding, multicultural marketing and entertainment.