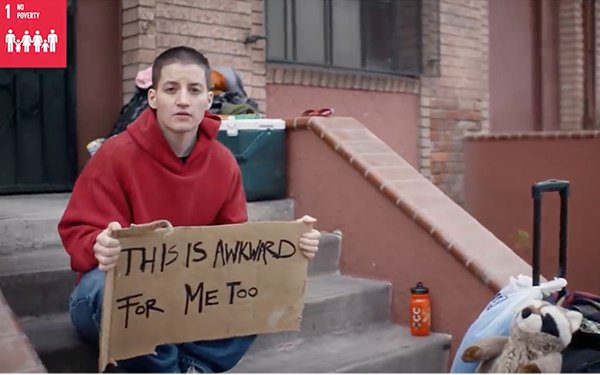 YouTube has partnered with the United Nations and Tribeca Enterprises to pose a challenge to world-class creative agencies and filmmakers: use sequential ad campaigns to drive awareness and action for the Global Goals for Sustainable Development. Here's what happened.

The project, which focuses on the way sequential storytelling changes video ads, addresses issues from gender equality to climate action and quality education.

Eight creative teams developed campaigns that sparked action, driving a 120% year-over-year traffic increase to GlobalGoals.org and more than 80% in new visits. The campaign were tested between July 28 and August 27, 2020.

Deutsch in Los Angeles, for example, worked with Tribeca to create a sequenced campaign called Unskippable Humans that confronted viewers directly with the question “Is it okay to skip homeless people like you skip ads?” as they are given the choice to skip the ad.

Ironically, this campaign, which relied heavily on skippable assets, drove the highest view rate of all campaigns at 35% across all assets.

The initial video -- which is 18 seconds long -- garnered a 47% higher view-through rate, and it remained consistently high throughout the sequence of videos. It also drove the highest lift in awareness, at 9.1%.

Goodby Silverstein & Partners’s Life Below Water made a mockery of plastic in the ocean. Morgan Freeman narrated the piece, saying that these underwater creatures can live to be 100 years old, as the image of a plastic bag floats through the water. This campaign used two six-second bumper ads to build buzz a longer 2:20-minute version.

This campaign drove the highest lift in consideration across all campaigns at 7.3%, reaching more than 3.9 million unique viewers, or viewers who saw at least one of the videos in the sequence over the course of the 30 days.

The series of ads all focused on storytelling to get their point across. And while they are all worth mentioning, Leo Burnett in Chicago and the Responsible Consumption and Production team used Humor and standup comedians to deliver their important message. They had a hypothesis that they could “roast and retry” a skipper with a punishment song to regain attention. The view rate rose or remained steady on ads following the “retry” ad, and the ad in the sequence immediately following the “roast” ad that drove a watch time 49% higher than the average watch time across all the ads in the sequence.

There were other impactful ads, such as the one on gender equality from Dentsu Thailand, Morvasu and Aoe Khamdaeng, and Sustainable Cities and Communities from Wunderman Thompson and Vellas.