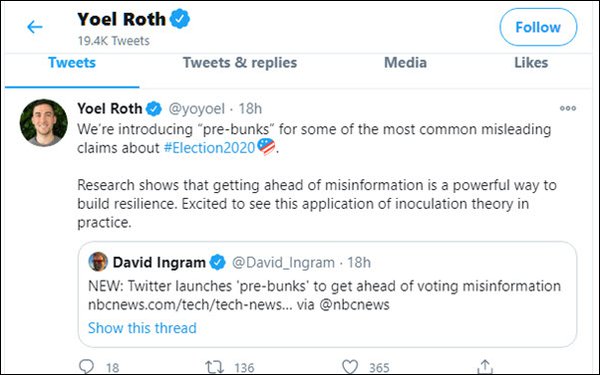 Twitter on Monday announced that it will start placing messaging at the top of users’ feeds that aims to preemptively counter any false tweets about voting and the election.

The unprecedented messaging format, dubbed a “pre-bunk,” will appear at the top of all U.S. users’ news feeds.

“We’re introducing ‘pre-bunks’ for some of the most common misleading claims about #Election2020,” tweeted Twitter’s Head of Site Integrity, Yoel Roth (above). “Research shows that getting ahead of misinformation is a powerful way to build resilience. Excited to see this application of inoculation theory in practice.”

One message reads: “Election experts confirm that voting by mail is safe and secure, even with an increase in mail-in ballots. Even so, you might encounter unconfirmed claims that voting by mail leads to election fraud ahead of the 2020 US elections.” The message is accompanied by a link to additional voting information.

Another points out that full election results may be delayed for legitimate reasons.

The move is the most recent in a flurry of actions taken in recent weeks by Twitter and Facebook in efforts to address the flood of falsehoods about voting, including President Trump’s claims that mail-in voting is rife with fraud.

Twitter — which stopped taking political ads as of late last year — has previously said that candidates cannot claim election wins on its platform prior to authoritative calls (from election officials or two national news outlets), and that it will put warning labels on any premature results calls, with a link to its election page.