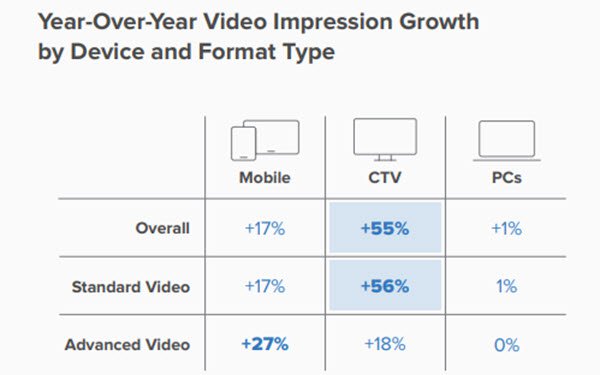 In the third quarter, connected TV ad impressions were up 55% in comparison with the year-ago quarter. That resulted in CTV’s share of video impressions rising to 41%, from 33% in Q3 2019, according to Innovid’s just-released Fall 2020 U.S. Video Benchmarks Report.

During the same period, mobile’s share of video impressions declined by 8%, to 43% — leaving mobile with a two percentage-point edge over CTV. PC impressions continued to decline, dipping 20%, to a 16% share. 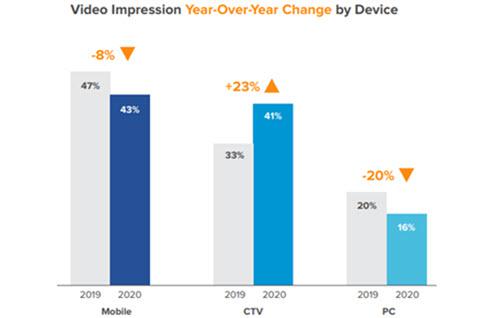 Innovid, which says it serves one in three of all video ad impressions in the U.S., analyzed 60 billion-plus impressions served on its platform across mobile, desktop CTV devices and social media, between July and September.

Among the key takeaways from the analysis are that audiences want more than standard, static pre-roll ads and passive messages produce passive results.

Ads with interactive elements that offer viewers a choice of experience had 14 times the engagement rate of the next-highest ad type. 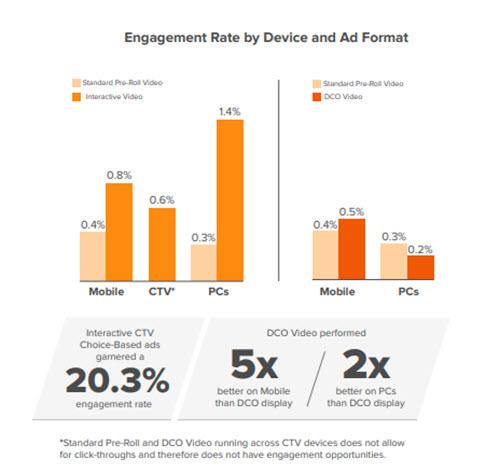 Here’s a detailed look at three metrics for CTV during the period: engagement rate by ad format, time earned by ad format, and video duration by ad length: 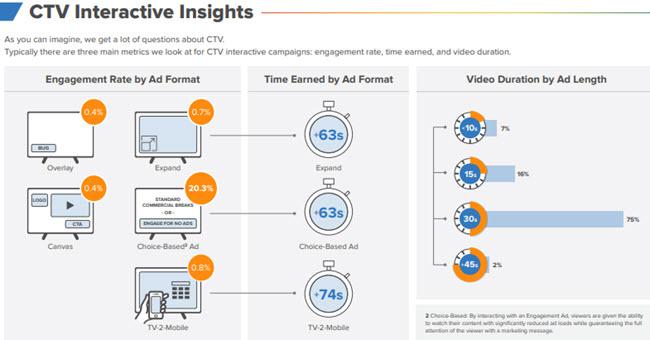 Not surprisingly, given that viewers are forced to watch ads to end on CTV before programming continues, CTV had by far the highest ad completion rate in the period, averaging 90.5%.

But in contrast to desktop’s reputation on the completion-rate factor, PCs outperformed mobile on this metric across all formats.

In Hogue’s view, the latest report demonstrates that CTV has now become “table stakes” for advertisers, and that brands, agencies and publishers “should be laser-focused” on how CTV measurement, identity, interactive formats and programmatic buying develop over the next 12 months.

Another trend: TV’s increasing viability as an option for “performance-based” D2C brands — with interactive formats taking CTV, in particular, beyond an awareness channel to one suited to performance strategies.

One timely example of that trend: NBCUniversal’s retail partners for its expanding cross-platform ecommerce initiative, most of which haven’t previously used TV advertising.

One aspect of CTV beyond the scope of Innovid's report: Continuing fuzziness in regard to how much big brand advertisers are actually spending in CTV, and where.