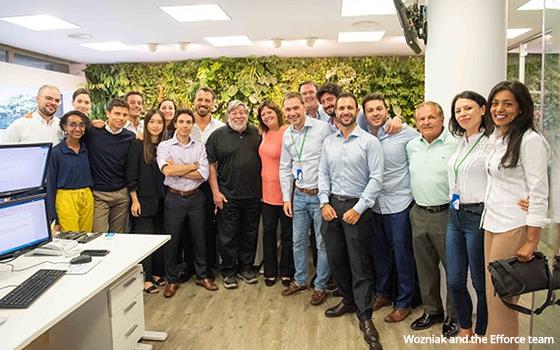 Apple co-founder Steve Wozniak began marketing and rolling out his second company aimed at disrupting the energy-efficiency market based on the amount of consumption that computers and other electric devices require to run daily.

Efforce is a decentralized platform using blockchain technology that allows consumers to participate in energy-efficient technology and programs and relies on tokens.

A smart contract redistributes the results and savings to token holders and the companies without intermediaries based on consumption and saving data.

While it's not easy to think that anyone can follow the same success as Apple, Efforce execs describe the services as the first blockchain platform that allows people to participate and benefit from a worldwide energy-efficiency project.

"Energy consumption and CO2 emissions worldwide have grown exponentially, leading to climate change and extreme consequences to our environment,” Wozniak stated. “We can improve our energy footprint and lower our energy consumption without changing our habits. We can save the environment simply by making more energy improvements.

Calculating consumption requires several factors, but on average the unit annual energy consumption (AEC) for desktops is estimated at between 194 and 200 kWh, a measure of energy, per year; and for laptops 75 kWh per year.

The token listing on Thursday sent the company’s market capitalization to $950 million in the first 13 minutes -- 10 times the listing price, the company said.

Efforce has received an initial valuation of $80 million by investors in private sales.

Wozniak founded Efforce with Jacopo Visetti, project lead, and Jacopo Vanetti, CRO and tech experts. Both are extensively familiar with the energy-efficiency sector.

After a decade of experience with the less efficient, but still-profitable energy-services companies (ESCO) model, the three began to develop the Efforce business model and platform.

Visetti previously founded Milan-based AitherCO2, with annual revenues of $240 million and no outside investment funding. Wozniak was attracted to Efforce for its unique approach to democratizing energy efficiency.

This is the only company he has participated in as a co-founder since Apple.